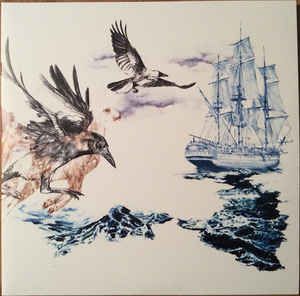 A1 War On Torpor
A2 Horripilation
A3 A Murder Of Thoughts

B1 Bound And Boundless
B2 Her Eyes On The Horizon

Sticker: 2x180gLP w/etching + 12"x24" art print + MP3
All printed on uncoated boards and papers.
C1 is subtitled (As Far As The Eye Can See) on the Constellation website.

War on Torpor, Bound and Boundless, and Her Eyes on the Horizon were recorded at the Bathouse, Bath, Ontario [...]
Horripilation, Murder of Thoughts, d=3.57√h and Return, Return Again were recorded at Sundlaugin Studio, Reykjavik [...]
Schlomo’s Son was recorded at the Lost Tin Rooster Studio in Toronto on 4 government tracking/corporate data-gathering devices

All this was glued together, cut up and glued back together, fought over, hugged, cried, and laughed over, hotly debated, overdubbed and underdubbed, mixed and pre-mastered [...] at Th’Schvitz in Toronto from spring 2014 to fall 2016.

Meticulously mastered for your eyes [...] at Lacquer Channel Toronto.
Barcode and Other Identifiers

( Exclaim) " Like life itself, this process can be messy, complicated, and fraught, no matter how hard we try to fit it into our neat categorical frameworks. Do Make Say Think make music that captures these phenomena in a sonic vernacular that, on their latest LP, is aimed at interrogating the Stubborn Persistent Illusions we find ourselves embroiled in every day.

The nine instrumentals that make up the band's first album in almost as many years are all written in major keys. They have a warmth and earnestness that permeates their complex emotional movements. Their soundscapes seamlessly blend the organic and rustic infrastructures of urban life.

Despite the lack of lyrics, vivid imagery abounds: "Her Eyes on the Horizon" conveys a hazy, shimmering sense of distance, as though she's gazing out over lake Ontario, her surroundings shaded in with leaping horn melodies and carefully intertwined guitar arpeggios. "A Murder of Thoughts" circles around a rumbling floor tom rhythm, gliding patiently like a murder of crows. When the "War on Torpor" is declared in the opening track, the band try to lead by example, building up a harmonious roar overtop a restless and exuberant scurry of drums.

Stubborn Persistent Illusions can seem daunting with its hour-long runtime, but it's a worthy monolith that can be explored on the listener's own terms. These songs don't necessarily need your attention for validation — they have their own agency. Inevitably, they will come home to roost. (Constellation) "