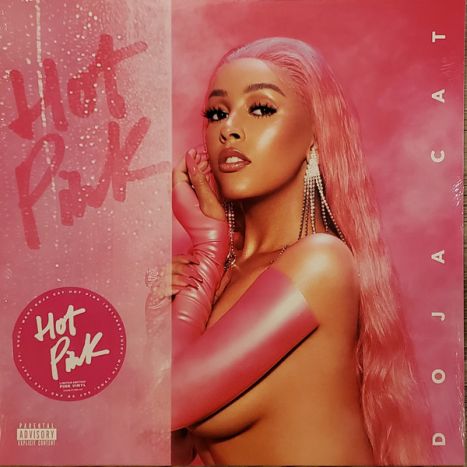 Comes with insert that has download code, note, and lyrics.

Hot Pink is the second studio album by American singer and rapper Doja Cat. The album was released on November 7, 2019, by Kemosabe. A departure from the dancehall and psychedelic style of her debut album Amala (2018), it is a pop, R&B and funk record containing elements from soul.

"Hot Pink runs the gamut of a sound that’s still taking shape. Doja’s equally capable as a rapper and a singer, but it’s her understanding of melody that makes the project flow. On “Like That,” featuring Gucci Mane, Doja weaves easily from rap mode into a whispery chorus with an upbeat R&B groove reminiscent of early-2000s Janet Jackson. It’s the perfect soundtrack for a backyard party. “Rules” captures a more serious—though hardly humorless—mood, pairing eerie old-western bass with Doja’s memorable command: “Play with my pussy, but don’t play with my emotions.” (Both songs were co-written with Dr. Luke; Doja Cat is signed to his imprint Kemosabe.)

Other songs, like bubbly opener “Cyber Sex” and the Blink-182-sampling “Bottom Bitch,” explore Doja’s potential as a pop star. Their imaginative videos cast her as a playfully raunchy android or a rebellious, milkshake-throwing skate punk, attention-grabbing themes designed to illustrate distinct musical aesthetics. To some, tracks like these could seem ultra-commercial, but Doja’s earned the right to flex her duality. Her pop songs complement her more intimate music without diluting it.

Throughout the rest of the LP, Doja leans into her softness. The dreamy soprano she introduced on 2014’s Purrr! EP cradles the ear like a fluffy pink pillow. It’s when Doja slows down or lightens her bars with her silky rasp that she sounds the clearest. “Shine” dazzles with spurts of tasteful Auto-Tune as she brags about her jewels and her pearly whites in an enchanting blend of rap and breathy lullaby: “What’s that drippin’? No, baby, I’m not cryin’/Baby, that’s my diamonds, everything so vibrant.” It’s not hard to picture her recording a ballad like “Streets” from within an all-pink lair. She’s even more serene on the penultimate “Better Than Me”: Surrounded by slinky, psychedelic guitar, her voice is soothing and slightly coy as she sings to a man who needs a reminder that there’s no one above her. “The best pussy/Comes from wifey,” she coos, elongating every word so he’s sure to hang on. It’s a Doja love song: a tinge of heartache and vulnerability with more than enough confidence to drown out the sadness." ( Pitchfork)