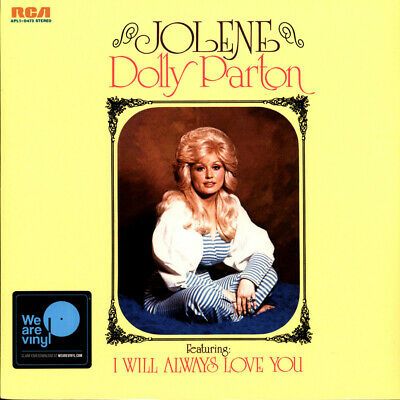 Jolene (1974) is Dolly Parton's 13th solo studio album, produced by Bob Ferguson. Parton's female protagonists are downright pitiful, adrift in a world where a more attractive woman might take their man, where a woman cannot let go of a man who no longer loves her

"Country music fans long ago learned that it's a serious mistake to confuse Dolly Parton's over-the-top style with her musical substance. For beneath the flamboyant wigs, rhinestone-studded get-ups, hour-glass figure and self-deprecating humor is one of the most gifted songwriters and loveliest of voices of the past few decades.

Jolene, recorded in 1972 and '73 in Nashville with that musical mecca's finest session musicians, if filled not only with richly tuneful love songs, but a pair of numbers - "Jolene" and "I Will Always Love You" - that topped the country chart. (Dolly has had an incredible 24 Number One country hits.) "I Will Always Love You" is a perfect example of how a great songwriter can bring universality to a specific event, in this case the professional break-up of Dolly and her longtime duet partner Porter Wagoner, who contributed to this set the aching "Lonely Comin' Down."

In 1992 Whitney Houston made "I will Always Love You" an international pop hit, and, in the process, cemeneted it as one of Dolly's signatures. In the years since Jolene, Dolly herself has become a global superstar, not just in music but in the movies and as a chief of her own entertainment empire.  had more than a little to do with elevating her to the next level of stardom. And the next."