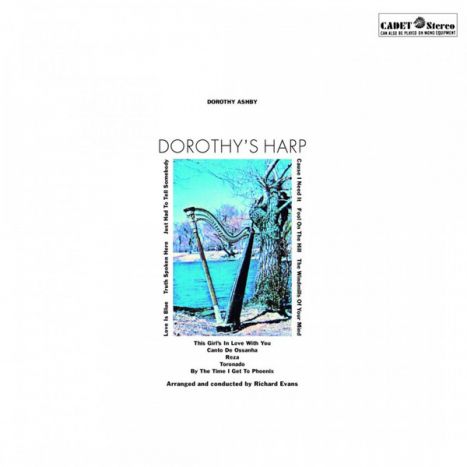 One of the grooviest Dorothy Ashby albums of the 60s -- a set that has her already-great jazz work on harp backed by Chicago soul arrangements from Richard Evans -- all in a blend that's somewhere in the territory of the Soulful Strings, but even groovier! And as an added bonus, Odell Brown even plays a bit of Fender Rhodes on the record -- which sounds especially great! Both Ashby and Evans are at the height of their powers here -- mixing together bits of jazz, soul, and trippier elements in a sublime late 60s Cadet Records blend -- one that's carried off perfectly on the original tunes "Truth Spoken Here", "Tornado", "Cause I Need It", and "Just Had To Tell Somebody" -- but which also sounds great on some of the album's cool covers too! Other titles include Brazilian numbers "Reza" and "Canto De Ossanha" -- both of which are transformed in Dorothy's hands -- plus "This Girl's In Love", "By the Time I Get to Phoenix", and "Windmills of Your Mind"!
Beautiful original copy of one of Dorothy's best--and certainly her rarest--LPs. Good from beginning to end loaded with funky beats, psychedelia and latin tinged flavours.