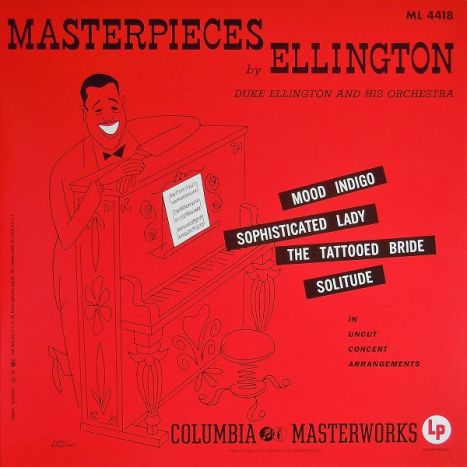 Duke Ellington And His Orchestra – Masterpieces By Ellington

"This new re-issue slays my vintage copy in every way. Every dimension of the recording was much better...dynamics, harmonics, frequency response, detail, jump...all just leaped out at me! The recording sounded like it had been made that morning...absolutely fresh-sounding. No veiling. No roll-off. In fact, it's so good that it doesn't matter that this is a mono recording! Listen to it on a great turntable...you'll hear mono that fools you into thinking that it's not mono. Just wait until you hear Yvonne Lanauze sing, "Mood Indigo" amigos, after a long instrumental build-up...she'll take you there! ... The pressing itself was impeccable: flat, and free of noise, tics and pops...a genuine masterpiece of the pressing-plant arts. The Hyperion OCL, the finest cartridge that I've ever heard, revealed how superbly these grooves were carved! Commendable, reference-grade analog...very, very close to master tape sound. Very damned close! Kissing cousins close! Hell, maybe even closer than that. In fact, I now consider the Analogue Productions re-issue of Masterpieces by Ellington to be one of the very finest Jazz records ever released. (Sorry Miles! Move over, Kind of Blue!)." — David W. Robinson, editor-in-chief, Positive Feedback Online.