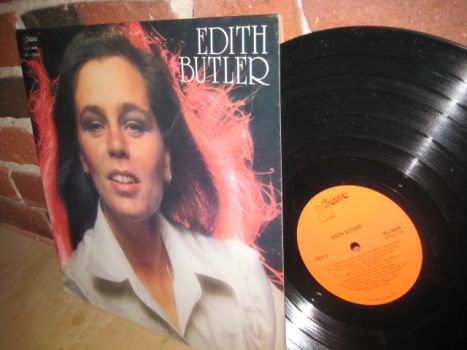 Issued on the SPPS label,
catalogue # PS-19909.
Record is VG++
Cover has ringwear

Her career began in the early 1960s with performances in Moncton, followed by national appearances on CBC Televisions Singalong Jubilee. Edith Butler worked in Music Production on the movies La Traversee de la Pacific and Gapi.
She began singing in cafés in Moncton while studying. Between 1962 and 1967 she performed mainly at festivals and on Halifax TV, singing Acadian folksongs to her own guitar accompaniment. She took the leading role in the film Les Acadiens de la dispersion, produced by the NFB in 1964. After teaching 1964-6 in Bathurst, NB, she did ethnographic research 1966-9 at Laval University and continued to perform in boîtes à chansons in the Quebec City area. At Expo 70 in Osaka, Japan, she was a featured performer at the Canadian Pavilion for six months. That same year she took part in the Mariposa Folk Festival and other festivals in Toronto and Washington. She toured Ireland in 1971 and Europe in 1973.

The musical collaboration between Reads Aubut and Édith Butler dates back to 1973. Auteure and in love with music, Read Aubut will be one of the first artists, with Édith Butler to make known the Acadian culture to Canada and in the French-speaking world.


In 1975 with her agent Lise Aubut she founded les Éditions de l'Arcadie and l'Acalf (Aide à la création artistique et littéraire de la femme) and recorded from 1976 to 1983 on SPPS label (Société de production et de programmation de spectacles) a record company which she had founded with Lise Aubut, Angèle Arsenault, and Jacqueline Lemay in 1974. She has published a collection of songs, L'Acadie sans frontières (Montreal 1974), and a collection of songs was published by Intermède Musique in 1978. She is the recipient of many awards: the Ordre du Mérite de la culture française (1971); Officer of the Order of Canada (1975)