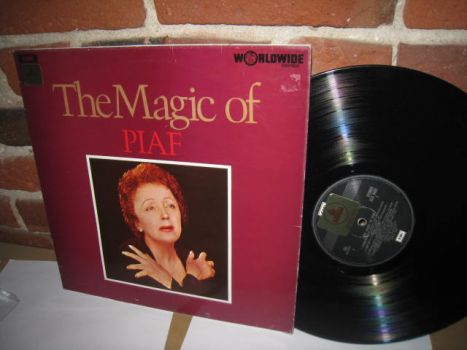 A thousand years from now," wrote Monique Lange in Piaf, her biography of French songstress Edith Piaf, "Piaf's voice will still be heard, and each time we hear it we will wonder anew at its strength, its violence, its lyrical magic." Edith Piaf's rise from street urchin to concert-hall chanteuse was more romantic than any novel. Her end in drug and alcohol dependency was sadder than any melodrama. Her voice expressed the agony of millions, and millions followed her love affairs and her divorces, knew her songs, and revelled in the triumphant comebacks she made time and again. She was adored everywhere, but she never stopped searching for love.

After the war Piaf set out to make herself an international star. Her 1946 release of "La Vie en Rose" became a major American hit. She arrived in New York City in 1947 to begin a series of American engagements. The petite Piaf, with her simple black dress and songs of struggle and abandonment, was not the sexy, sophisticated Frenchwoman many Americans expected, and she initially met with little success. It was not until a performance at the Versailles--one of the most elegant supper clubs in New York--and several glowing reviews that Edith Piaf became the toast of Manhattan and later Hollywood society.

While in New York, Piaf began an affair with Marcel Cerdan, the French boxer and newly crowned middleweight champion. Like all of her romances, the union was a torrid one. As a boxer, Cerdan traveled extensively, though Piaf wanted him to be with her. He was in the Azores when Piaf phoned and persuaded him to fly back to New York. Tragically, the plane on which he was returning crashed, killing everyone on board. Of Cerdan's death, in October of 1949, Piaf biographer Monique Lange declared, "It marked the beginning of her decline, of the period when she fell completely apart."

Throughout the 1950s Piaf appeared in films and had continued success as a performer and recording artist. But these successes were interspersed with periods of illness, drug use, and mental instability. In September of 1952 she married the singer Jacques Pills--an arrangement that soon ended in divorce. In the late 1950s a series of car accidents pushed her further into a dependence on morphine and other painkillers. In Piaf, Lange reported, "At the end of her life, when she was practically incapable of even getting up on stage, she had to have an injection in order to sing."

Despite rumors that she had died, by the late 1950s Piaf's career was once again on the upswing. Her 1959 recording "Milord" was one of her biggest hits, as was "Non je ne regrette," released in 1960. On December 29, 1960, she made a triumphant appearance at Paris's Olympia Theater, proving she still retained the adulation of France..
More Information
Please sign in with your email address or Create an Account.
New Products
Compare Products
Compare
Clear All
You have no items to compare.
My Wish List
Last Added Items
Go to Wish List
You have no items in your wish list.
Vinyl Records Vancouver
Categories
Help
Quick Link
Newsletter