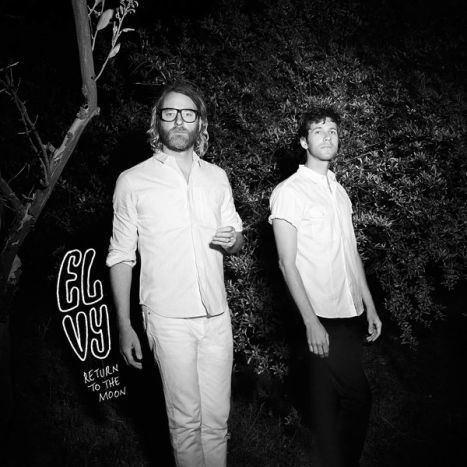 A1 Return To The Moon (Political Song For Didi Bloome To Sing, With Crescendo)
A2 I'm The Man To Be
A3 Paul Is Alive
A4 Need A Friend
A5 Silent Ivy Hotel


B1 No Time To Crank The Sun
B2 It's A Game
B3 Sleepin' Light
Featuring  Ural Thomas
B4 Sad Case
B5 Happiness, Missouri
B6 Careless


EL VY (pronounced like a plural of Elvis; rhymes with hell pie) is the musical collaboration between Matt Berninger, vocalist and lyricist of The National, and Brent Knopf, the Portland musician and producer best known for his work in Menomena and his more recent band, Ramona Falls. Their debut album Return To The Moon will be released on October 30th via 4AD. The album is a project Berninger and Knopf have been thinking about for years. Their friendship spans nearly a decade, starting back when the National and Menomena played small half-empty clubs along Americas west coast. Feeling an immediate musical kinship, the pair kept in touch, Brent sending Matt occasional rough sketches of music and Matt responding with melodies and lyrics. Finally, in the winter and spring of 2014-15, they actually got together to make an album.

El Vy play memorable thumpy-bump indie pop songs with a quirky rhythmic flow of eccentricity thats balanced by Berningers incredibly affective and embraceable baritone. Its a surprisingly congruous fit that pits the lightness of the music against the warmth and weight of an inviting vocal despair. Honestly, if the National rocks your boat, youll want to sail on this one, too. Knopfs musical contributions give the songs a slightly different twist, adding a strain of subtly playful overtones, but its still Berningers Leonard Cohen-esque voice that guides the ship and dips into the dark waters. Overall, Return to the Moon is a huggable sliver-shiver of an album that will touch your heart with the authenticity of its beauty and subtly strange melodic turmoil.

There are two artists I thought of several times when listening to the first few videos that were released from the album. Beck and Leonard Cohen. I was particularly surprised when the LP was released and heard Cohen referred to in one of Berringer's lyrics as well, but it is in the second cut "I'm the Man to be." that really reminds me of Beck. It is my favorite cut so far. I cannot get the chorus out of my head.
. It is also the most interesting song about auto erotic asphyxiation that I have ever heard. Actually the only one. That Matt Berringer is a bit twisted, I must say.

There is not a bad track on the album "Paul is Alive" is another favorite, an autobiographical tune that tells the story of Matt's early exposure to indy music via his mother. "Happiness, Missouri" is the shortest song on the LP but is just about perfect.
More Information
Please sign in with your email address or Create an Account.
New Products
Compare Products
Compare
Clear All
You have no items to compare.
My Wish List
Last Added Items
Go to Wish List
You have no items in your wish list.
Vinyl Records Vancouver
Categories
Help
Quick Link
Newsletter