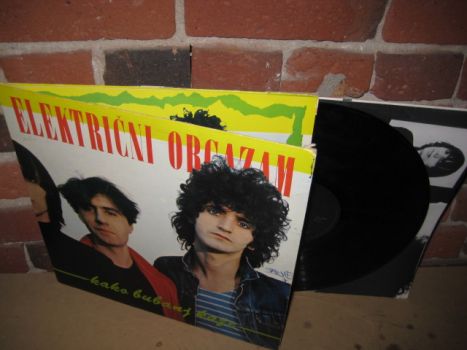 
Električni orgazam (Serbian Cyrillic: Електрични оргазам; trans. Electric Orgasm) is a band from Belgrade, Serbia. Originally started as punk and post punk, they later slowly changed their style and became a mainstream rock band. They were an important band of the Yugoslav New Wave scene and the Yugoslav Rock scene in general.

Their first self-titled album was released in 1981 featuring a fairly straight-forward punk sound with a small dose of post punk aesthetics. This LP was also distributed in the rest of Europe via Rough Trade label, managing to get some very good reviews in the British music magazine NME. During November 1981, Električni orgazam toured Poland and recordings from the gig in Warsaw were released as EP Warszawa '81 limited to only 2,000 copies. It was a first official bootleg released in Yugoslavia.

On their second, quite experimental and artistic album Liće prekriva Lisabon 1982 (translated: Leaves Fall Over Lisbon) they incorporated a wider range of psychedelic influences. It was a post punk record with dark edge in the goth manner of Bauhaus and the likes.

The third LP Les Chansones Populaires consisted only of classic covers from David Bowie, The Doors, T. Rex, The Rolling Stones, Velvet Underground and others. After "Chansones..." Električni orgazam adopted a more mainstream rock sound while their concert performances remained punk-oriented, mainly due to the stage persona of their frontman Gile.

After their third album Kako bubanj kae 1984 (translated: As the Drum Says) keyboardist Ljubomir Đukić left the band. With the next line-up, claimed by fans and critics as their best one (Srđan Gojković - guitars, vocals, Branislav Petrović - guitars, Zoran "Svaba" Radomirović - bass and Goran "Čavke" Čavajda - drums),
More Information
Please sign in with your email address or Create an Account.
New Products
Compare Products
Compare
Clear All
You have no items to compare.
My Wish List
Last Added Items
Go to Wish List
You have no items in your wish list.
Vinyl Records Vancouver
Categories
Help
Quick Link
Newsletter