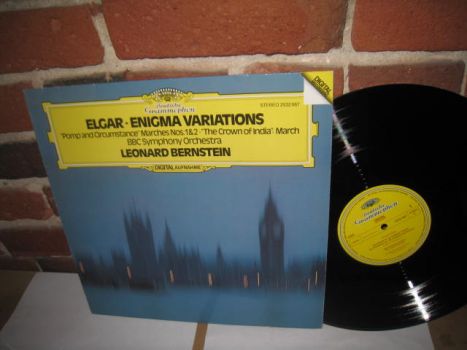 
The Crown Of India, Op. 66, March Of The Mogul Emperors


No doubt Bernstein knew that he was throwing a Molotov cocktail into the laps of the British musical establishment with this notoriously slow Enigma Var. There's no harm in that, certainly, and much of the time he does find special pathos and tenderness by giving the music such a measured pace. This is a melancholy, backward-glancing look at a bygone imperial ethos. LB has the right to take that position; by comparison, more than one beloved English conductor sounds flimsy by comparison.

The "Nimrod" Variation is the emotional heart of the piece, and Bernstein's six and a half minute processional exasperated many critics. I am of mixed minds about it myself, but there are many ohter things to admire here, expressive touches that no one else achieves. Also, one shouldn't overlook the unbottoned jollity of the Pomp and Circustance marches in his hands.


This really is a fantastic performance of Elgar's Enigma Variations. Considering the number of times this work has been recorded, and also considering that Bernstein approached the work in much the same way he did everything he performed during the 1980s (slow often to the point of parody and dramatic sometimes to the point of vulgarity), it is striking that this particular performance seemed to attract so much hostility among both critics and even the orchestra that recorded it. It is certainly a unique performance and a bold interpretation. Surely for that reason alone it deserves to stand alongside the dozens of recordings by Boult and Barbirolli.

Overall, the BBC Symphony plays wonderfully (hard to imagine that the tension between the orchestra and conductor was so great that Bernstein refused to conduct the orchestra again). The slow, distended performance of the theme opens the way for a dark, brooding, but heartfelt interpretation. The boisterous variations such as WMB, Troyte, and GRS are vibrant, energetic, and well balanced (the timpani in Troyte sound clear and well defined). The more intimate, quiet moments such as CAE and Ysobel are warm and delicate. Nimrod is played as slow as possible, and while many may dislike this, it is nevertheless a reflective interpretation that reminds us that Elgar's main goal here was to write a Beethoven adagio. Indeed, my main criticism of this recording isn't the slow Nimrod, but the awkward sounding organ in EDU. It buries the orchestral sound, making for a disappointing finish to a bold but unique performance.

In short, if you're looking to own just one interpretation of the Enigma Variations, this may not be your best bet. But if you want to hear a radical rethinking of the work that still sees the work as part of the tradition of late 19th century romanticism, then hearing this performance will be worth your time.


Edward Elgar: Pomp and Circumstance, Op.39 Military Marches No.2 in A minor