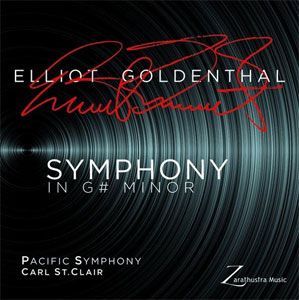 Composer, conductor, and orchestra previously collaborated 20 years before when Pacific Symphony commissioned and recorded Goldenthal's highly acclaimed 'Fire, Water, Paper - A Vietnam Oratorio.' For the occasion of the orchestra's American Composers Festival 2014, Goldenthal composed his 25 minute symphony, in the obscure yet autobiographical key of G# Minor, especially for the occasion. The work premiered immediately after the composer's 60th birthday in May 2014 and represents Goldenthal's first large-scale concert work since Fire, Water, Paper.

In the past 20 years, Goldenthal has garnered three Academy Award nominations (Interview with a Vampire, Michael Collins) and won and Oscar and Golden Globe for his score to Frida. In 2007, Goldenthal was finalist for the Pulitzer Prize in Music for his opera Grendel which premiered at Los Angeles Opera and Lincoln Center Festival. In 2013 composed his String Quartet No. 1 'The Stone Cutters' as well as music for Julie Taymor's stage production of 'A Midsummer Night's Dream' that opened a new theater in Goldenthal's hometown of Brooklyn, NY. In 2013 the Joffrey ballet produced his large-scale three-act ballet Othello at the 4, 000 seat Auditorium Theater in Chicago, and in 2015 the American Ballet Theater revives Othello for it's fourth time at the Metropolitan Opera House. Meanwhile, downtown the composer is providing 'Music & Soundscapes' for the new one-woman show Grounded starring Anne Hathaway at the Public Theater. Goldenthal remains one of the most highly acclaimed and dynamic composers working today.