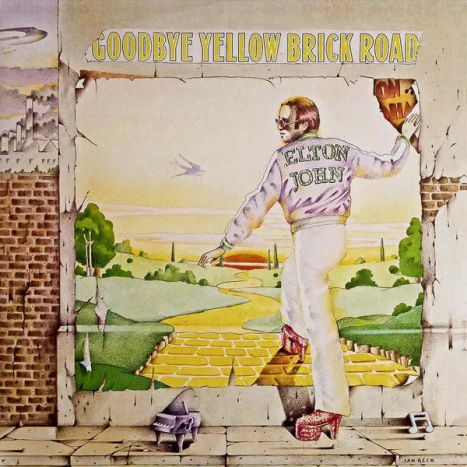 Label:
Mercury – 375 349-5, Universal UMC – 375 349-5
Format:
2 x Vinyl, LP, Album, Reissue, Remastered, Trifold, 180 Gram
2014 Remaster by Bob Ludwig at Gateway Mastering from the original analog tapes.
Mastered for vinyl by Doug Sax & Robert Hadley at The Mastering Lab, Inc, Ojai, CA
Barcode and Other Identifiers
Barcode: 602537 534951
Matrix / Runout (Side 1, stamped): 3753495-A 115917E1/A4
Matrix / Runout (Side 2, stamped): 3753495-B 156320E2/A4
Matrix / Runout (Side 3, stamped): 3753495-C 159367E3/A7
Matrix / Runout (Side 4, stamped): 3753495-D 192348E4/A2
Country:
US
Released:
Mar 24, 2014
Genre:
Rock, Pop
Style:
Pop Rock
Released: 1973
Genre: Rock
Style: Pop Rock, Classic Rock
Tracklist
Funeral For A Friend 11:08
Love Lies Bleeding
Candle In The Wind 3:50
Bennie And The Jets 5:23
Goodbye Yellow Brick Road 3:14
This Song Has No Title 2:23
Grey Seal 3:58
Jamaica Jerk-Off 3:59
I've Seen That Movie Too 5:59
Sweet Painted Lady 3:52
The Ballad Of Danny Bailey (1909-34) 4:24
Dirty Little Girl 5:01
All The Girls Love Alice 5:08
Your Sister Can't Twist (But She Can Rock 'n Roll) 2:42
Saturday Night's Alright For Fighting 4:54
Roy Rogers 4:08
Social Disease 3:44
Harmony
Companies, etc.
Phonographic Copyright ℗ – Mercury Records Ltd.
Copyright © – Mercury Records Ltd.
Published By – Dick James Music Ltd.
Published By – Universal Music Publishing Ltd.
Recorded At – Strawberry Studios, France
Mixed At – Trident Studios
Remastered At – Gateway Mastering
Lacquer Cut at – The Mastering Lab
Pressed By – GZ Media – 115917E
Pressed By – GZ Media – 156320E
Pressed By – GZ Media – 159367E
Pressed By – GZ Media – 192348E
Credits
Mastered By – Doug Sax, Robert Hadley
Producer – Gus Dudgeon
Remastered By – Bob Ludwig
Written-By – Elton John / Bernie Taupin*
Notes
By 1973, Elton John & Bernie Taupin had already logged enough hits to become a part of rock history, but even as their fanbase continued to grow, they hadn't yet reached their peak. When HONKY CHATEAU became Elton's first #1 album in 1972, it proved that he was not just someone FM radio played all the time, even AM listeners (and the biggest single-buyers) had taken notice as well. Continuing with the breakneck pace of his early `70s days, Elton turned up DON'T SHOOT ME I'M ONLY THE PIANO PLAYER early in '73 & won his first #1 single with "Crocodile Rock". Whether or not, Elton & Bernie had a sudden burst of creativity or wanted to give their fans more bang for their buck, they decided to make the next LP a double, which as rock history has dictated many times before, is almost a no-win situation. Rarely has a double album been great with every single song & needless to say, Elton & Bernie's certainly wasn't. But even their lesser songs were still darn good, making GOODBYE YELLOW BRICK ROAD not only their crowning achievement, but a good example of how a double album should be made.
Right from the grandiose opener, Elton & Bernie certainly did their homework on the ways of a double album. "Funeral For A Friend/Love Lies Bleeding" shows the influence of progressive rock on music of the time with its spacey synthesizer intro (not done by Elton) before leading into the piano-pounding rocker that details the end of a love affair in musical terms. Naturally, this had to have made one hell of an opener in Elton's concerts of this period & even when you just listen to it now, you can almost hear the possibilities for a stage performance of this song.
After that opening, ROAD takes the listener on many twists & turns through just about every conceivable genre of music that inspired Elton & Bernie throughout their careers up until that point. They namecheck reggae on "Jamaica Jerk-Off" (which sure is catchy, but not one you listen to a lot), R&B on the #1 hit "Bennie & The Jets" (it was also a hit on R&B stations, as well), Stones-based rock & misogyny on "Dirty Little Girl", more prog rock on the Yes-inspired "Grey Seal" & 1950s rock on "Your Sister Can't Twist [But She Can Rock & Roll]" (best when played as a segue to "Saturday Night's Alright For Fighting"). Occasionally, some songs sound better musically than lyrically, but you'd be a fool not to enjoy yourself either way.
But through all the genre experiments, there are still the perfect melodies & intelligent lyrics that have always been Elton & Bernie's fortes & ROAD still has plenty of those to spare. These include the #2 hit title track, the Marilyn Monroe tribute "Candle In The Wind" (a song that sounds good in both versions, believe it or not!), the heartbreaking closer "Harmony" (which has just that, beautiful harmonies equal to the Beach Boys) & cinematic epics like "I've Seen That Movie Too", "Ballad Of Danny Bailey [1909-34]" & "Roy Rogers".
Even with the hectic schedule Elton & Bernie put themselves on back in the 1970s, maybe a panoramic statement like GOODBYE YELLOW BRICK ROAD didn't seem all that impossible. But the fact it was Elton's second album of the year made it all the more astounding. With 3 major hit singles (the title track, "Bennie & The Jets" & "Saturday Night's Alright For Fighting") & considerable airplay for about all the other songs on here, ROAD's runaway success was more than justified. While the follow-up would indicate maybe the duo had written themselves out, GOODBYE YELLOW BRICK ROAD still showed Elton John & Bernie Taupin at the top of their respective games & even today, it's something they should still be enormously proud of.
Elton John - Candle in the Wind

. This is the original and absolutely the best--the performance, his voice, the strange muffly sound, Marilyn's film clips, those candles in the dark, his modern Mozart wig... the whole thing is inspired.