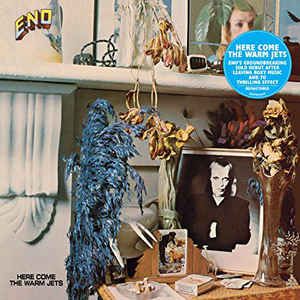 Here Come the Warm Jets is the first solo album by Brian Eno (although credited simply as "Eno"), recorded in a few weeks shortly after he left Roxy Music.

The album's musical styles range from aggressive garage rock ("Blank Frank") to serene Beach Boys-style reverie ("On Some Faraway Beach"). Eno enlisted a large number of guest musicians to play on the album, including three members of Roxy Music, guitarist Robert Fripp and bassist John Wetton of King Crimson and members of Hawkwind and the Pink Fairies. One of the most notable performances from these guests is the cacophonous three-minute-long guitar solo by Fripp on the song "Baby's On Fire".

"Warm jets" is used by Eno to describe the distorted guitar in the title track, which evokes the sound of a jet engine.1 Eno himself claims that he often chooses words for their sound.

The album provided Eno with modest success in the UK album charts, and would in fact be his only album to chart for the remainder of the 1970s apart from 1979's Music for Airports.

In 2003, the album was ranked number 436 on Rolling Stone magazine's list of the 500 greatest albums of all time.