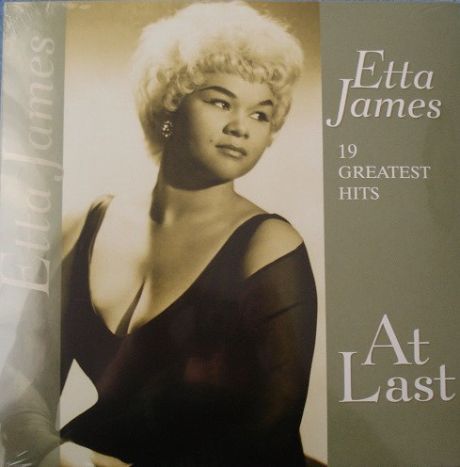 
A1 At Last
A2 Roll With Me Henry ( listed as The Wallflower)
A3 All I Could Do Was Cry
A4 Spoonful
A5 My Dearest Darling
A6 Fools Rush In
A7 Something's Got A Hold On Me
A8 Seven Day Fool
A9 How Do You Speak To An Angel?


B1 Trust In Me
B2 Don't Cry, Baby
B3 Stop The Wedding
B4 Fool That I Am
B5 Good Rockin' Daddy
B6 Next Door To The Blues
B7 If I Can't Have You
B8 It's Too Soon To Know
B9 Would It Make Any Difference To You
B10 Dream

Etta James (born Jamesetta Hawkins on January 25, 1938) is an American blues, soul, R&B, and jazz singer and songwriter. In the 1950s and 60s, she had her biggest success as a blues and R&B singer. She is best known for her 1961 ballad "At Last", which has been classified as a "timeless classic" and has been featured in many movies and television commercials since its release.


For over a half a century, Etta James all but defined the role of the quintessential rhythm & blues vocalist. She transcended all musical categories and styles with a recording career that spanned more than five decades. A musical force and a major hit-maker since the '50s, the Matriarch of the Blues has earned numerous accolades including six Grammy Awards, among them the prestigious Lifetime Achievement Award, a Best Jazz Vocal Performance and two Hall of Fame Awards.

In 1993, James was inducted in the Rock and Roll Hall of Fame, and in 2001 she was inducted by both the Rhythm and Blues Hall of Fame and the Rockabilly Hall Of Fame. Throughout her career, James created a remarkably deep and diverse catalog of R&B, blues, soul, pop and jazz recordings. James crossed all musical genres and styles and has been cited as a major influence by a wide range of artists.

At Last: 19 Greatest Hits is an expansive Vinyl Passion compilation which collects remastered original recordings of Etta James' most beloved classics including "At Last," Roll With Me Henry "All I Could Do Was Cry," "Somethings Got a Hold on Me," and "The Fool That I Am" among many others

This song is for a metssopran not a sopro like beyonce. it is about soul, timbre not just hi notes and trills

Etta James is the greatest!!! No auto tune, none of that crap, this is her voice and only her voice. What a woman

it just sounds like she puts more emotion into singing it, and her voiced is so strong and soulful


Etta James - Trust In Me