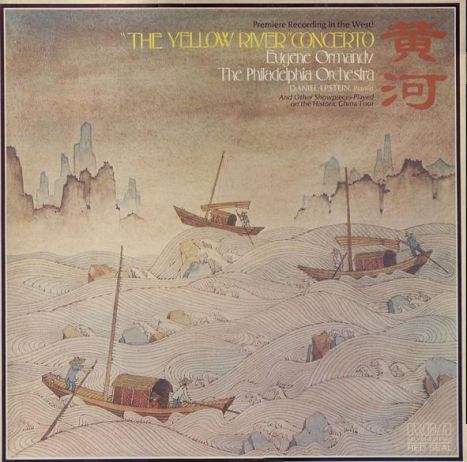 A2 San Pei (Chinese Workers's And Peasant's Match) 1:24
Arranged By – Jesse Taynton, William Smith
A3 The Stars And Stries Forever 3:36
Composed By – Sousa

Pines Of Rome
Composed By – Respighi

Quoted from the cover.
"Premiere Recording In The West"
""THE YELLOW RIVER" CONCERTO" - "A FIRST COUSIN TO THE WARSAW CONCERTO""

In 1973 Eugene Ormandy and his famous orchestra and other musicians played 6 concerts in Communist China. Although they were not paid a penny, they were honoured with the presence of Madame Mao (the Iron Lady of the Chinese Cultural Revolution, 1966-1976). Chairman Mao chose to stay away. The Yellow River Concerto was composed by a Chinese committee of 4 musicians. One friendly critic called it "first cousin to the Warsaw Concerto." There is no structure as understood in western classical music: exposition, development and recapitulation.