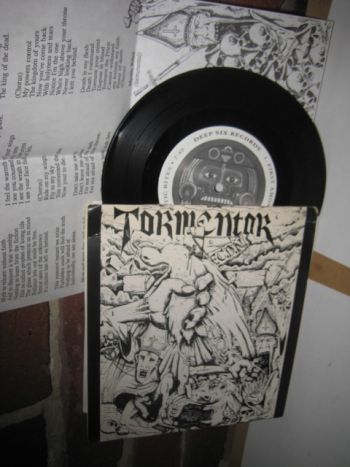 
From what I can find out about this record, it was put out around 1991 on Deep Six records(DS-02). I was a really big fan of Infest "Mankind" at this point so anything on Deep Six was good enough for me. The F.C.D.N. stands for "Fu++in' Catastrophic Destructive Noise", and these guys were into the black metal vibe before Emperor knew how to put on their makeup. Take a look at these guys, they mean business!

This band played from the mid-80s clean through to the 90s. The drummer, Ralo, went on to play in No Comment. This one is so awesome that words escape me. It sort of reminds me of Testament's "The Legacy" mixed with a shot of speed. The cover artwork was totally awesome too.
More Information
Please sign in with your email address or Create an Account.
New Products
Compare Products
Compare
Clear All
You have no items to compare.
My Wish List
Last Added Items
Go to Wish List
You have no items in your wish list.
Vinyl Records Vancouver
Categories
Help
Quick Link
Newsletter