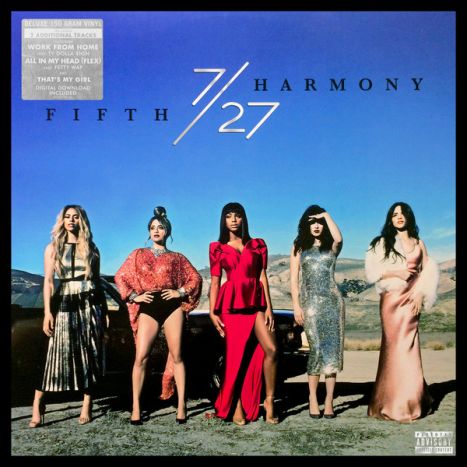 A1 That's My Girl
A2 Work From Home
Featuring – Ty$

B5 & B6 are bonus tracks.
Digital download code included: Code expires June 25th, 2017 and the digital copy of the album can not be accessed outside of the United States. Download card has catalog number 88985317641-11 printed on it.

"Fifth Harmony’s early singles sounded less like the work of a coherent group than a diva scrimmage, each singer trying to outperform the rest"

"It’s been several years and hits since then, though, and Fifth Harmony’s had some time to grow into themselves. The first track on *7/27—*the day the group originally formed—is as good a State of the Cowell-Administered Union as any. It begins like a retread of past hit “Worth It,” down to the deliberately squawky sax beat, but soon becomes a pep talk for fans complete with cheerleader whoops, a call to (immaculately toned) arms, and a showcase for each vocalist, now with discernibly individual personae: Ally on lead and Dinah on backup, Normani with the near-rap, Lauren’s cool alto balancing Camila’s Ring Pop of a voice. (Rumors of the latter being groomed for a solo career, at least as of this album, are exaggerated; 7/27 is as vocally egalitarian as any girl-group album of the past decade or so, and better for it.) It’s easily the best potential single the group’s ever released" ( pitchfork)