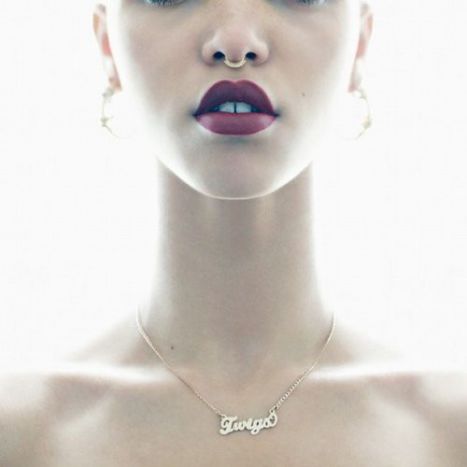 With roiling beats, floating vocals, and an ominous grace, this UK artist makes trip-hop for a new time.

Now, following a name alteration to FKA twigs, she unveils the brand new song Water Me. Co-produced by Twigs and advisor-to-Kanye, Arca. Sad, glitchy and fascinating, Arca plays it minimal and disorientating while Twigs shows off that room-silencing voice with lines like I told him water me.

Back in May, we mused that this enigmatic London vocalists then-current single, the evocative Hows That, just might be the most striking thing wed heard all year. Now, with this preview of EP No. 2, Twigs has gotten even more daring. Working once again with rising producer Arca, she forsakes the dynamics of standard song structure in favour of sounds that amplify the confessional nature of the lyrics. Fans of Björk circa All Is Full of Love and Imogen Heap circa Hide and Seek should dive straight in. - Water Me #1 The Anti-Hit List (Toronto Star)

Water Me is a first taste of the project, In the video Twigs eyes enlarge to Manga proportions, like scientists predict everyones eyes might 60,000 years from now, and cries a gel tear. It reminds me of Sinead OConnor and the slug parasites that infested peoples brains in the Animorphs book series. -Fader

Quiet and ambient, yet still packing a sense of haunting urgency, its especially moving when she sadly (and repeatedly) confesses, He wont make love to me now - Consequence Of Sound

Twigs is someone who grew up with a lot of quiet, surrounded by valleys, cows, and sheep in Gloucestershire, a largely rural county in southwest England. "The hardest part of the day would be if you got stuck behind a tractor on the way to school," recalls the 25-year-old. And though she moved to London to pursue dancing and singing about eight years ago, she's still managed to carve out calm amidst the buildings, sirens, and chatter. "I definitely keep myself to myself; I don't really go out," she says during our Skype video call. "If my friends want to see me, they know to come around to my house." She tends bar on the weekends-- "so I can afford to pay for the extra things I want as an artist"-- but even inside a noisy pub, she creates her own silenced shorthand. "My friend bought me a 'Twigs' nameplate necklace as a joke one Christmas," she says, "so when people would ask my name in a loud bar, I'd always just point to the necklace."

That understatedness runs through to her music, a serene style that pairs the xx's unflinching intimacy with a menacing undertow reminiscent of Massive Attack's Mezzanine. On her unassuming 2012 debut EP, she used negative space in a powerful way, her high-pitched whisper drifting in and out to narrate eerily charged scenes. A forthcoming four-track follow-up, dubbed EP 2 and out on September 10 via Young Turks, finds her even more gloriously weightless. Her voice now brings to mind Janet Jackson at her most delicate on tracks like the devastating first single, "Water Me", which features production from the young breakout producer-- and Yeezus collaborator-- Arca.  Pitchfork

Water Me', or 'How's That', but even if you haven't, there's still two brand new beauties exclusive to this single. The A-side commits the liquid crystal 3D refractions of 'How's That', with its aching vocal and polymetric swirl, beside new bit, 'Papi Pacify' - a stunning piece of octave-vaulting vocals and crushing but snakily elusive drum weight from Arca - whilst the B-side makes physical the digital fantasia of the incredible 'Water Me' - one of this year's best pop songs, bar none - and another exclusive stunner, 'Ultraviolet' rending Ms FKA as an isolated digital siren swarmed by her inverse and alien reflections against a gyroscopic backdrop of quasi-speed magma beats and dynamically diffuse chords.


One of my favorite releases of 2013. The vocals, bass and slow jam tempo are all on point