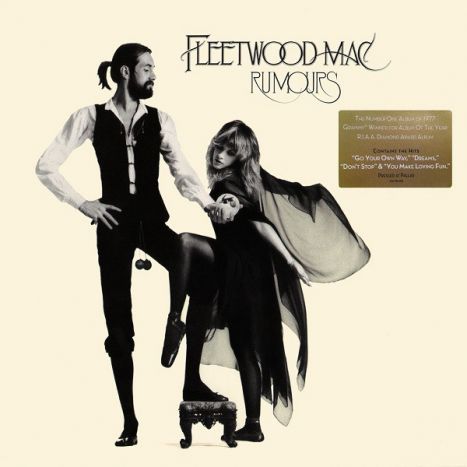 Includes a fold out insert with album credits, lyrics and photo

Copyright 2009 by Reprise Records for the U.S. and WEA International Inc. for the world outside of the U.S. Produced 1977 by Warner Brothers Records. Made in the U.S.A.

Rock & roll has this bad habit of being unpredictable. You never can tell when a band will undergo that alchemic transmigration from lead to gold. The medium of transformation is almost always a hit single, but such turnarounds often swamp a band in notoriety it can't live up to.

But in Fleetwood Mac's case the departure of guitarist Bob Welch -- who'd reduced the band to recutting pointless and pretentious versions of old standards -- amounted to the biggest break they ever had. With that and the addition of Lindsey Buckingham and Stevie Nicks, Fleetwood Mac suddenly became a California pop group; instead of laborious blues/rock jams they started turning out bright little three-minute singles with a hook in every chorus.

Christine McVie now leads a classic vocal group working out of the oldest popular tradition, love songs. Vocal harmonies are the meat and potatoes of California's pop identity, and Fleetwood Mac is now one of the genre's main proponents, with three lead singers of comparable range. Taken individually, only McVie's voice has much character, but she anchors their vocal arrangements, since Nicks' low range and Buckingham's high range approximate here dulcet, evenhanded timbre.

Despite the interminable delay in finishing the record, Rumours proves that the success of Fleetwood Mac was no fluke. Christine McVie sounds particularly vital on "You Make Loving Fun," which works for the same reason "Over My Head" was a smash. The formula is vintage Byrds: Christine sings the verse simply, with sparse instrumental background, and the chorus comes on like an angelic choir -- high harmonies soaring behind her with 12-string electric guitar counterpoint ringing against the vocals.

The Byrds touch is Lindsey Buckingham's province, and it's used most successfully on the single, "Go Your Own Way," which employs acoustic guitar backing throughout, with best effect of the choruses. Mick Fleetwood's drumming adds a new dimension to this style. Fleetwood is swinging away, but not in the fluid roll pattern most rock drummers use. Instead of pushing the rhythm (Buckingham's acoustic guitar and John McVie's bass playing take care of that) he's punctuating it, playing against the grain. A touch like that can turn a good song into a classic.

Buckingham's contribution is the major surprise, since it appeared at first that Nicks was the stronger half of the team. But Nicks has nothing on Rumours to compare with "Rhiannon," her smash from the last album. "Dreams" is a nice but fairly lightweight tune, and her nasal singing is the only weak vocal on the record. "I Don't Want to Know," which is pure post-Buffalo Springfield country-rock formula, could easily be confused with any number of Richie Furay songs.

Buckingham's other two songs here are almost as good as "Go Your Own Way." "Second Hand News," ostensibly about the breakup of his relationship with Nicks, is anything but morose, and completely outdoes the Eagles in the kiss-off genre. Again the chunking acoustic guitar rhythm carries the song to a joyful chorus that turns average voices into timeless pop harmony. It may be gloss, but it's the best gloss to come along in a long time. "Never Going Back Again," the prettiest thing on the album, is just acoustic picking against a delightful vocal that once again belies the bad-news subject matter.

Fleetwood Mac's change from British blues to California folk-rock is not as outlandish as some might think. The early Sixties blues scene in England had as much to do with rural American fold music as the urban blues sound, which was predominantly a guitarist's passion anyway. Christine McVie is much closer to a singer like Fairport Convention's Sandy Denny than to any of England's blues shouters. Without altering her basic sensibility McVie moves easily into the thematic trappings of the California rock myth. She's always written love songs, and sings here ballads with halting emotion. "Songbird," her solo keyboard spot on Rumours, is elevated by its context from what would have been referred to as a devotional blues into a pantheistic celebration of love and nature.