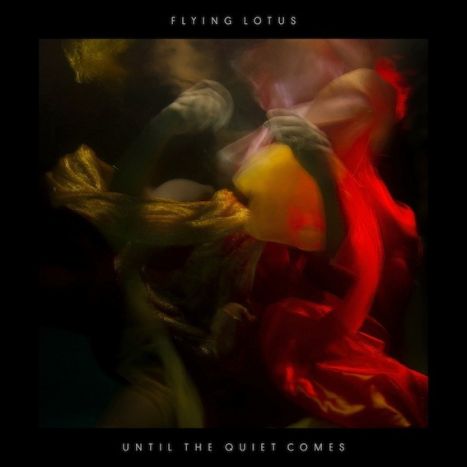 Flying Lotus - Until The Quiet Comes

A3 Until The Colours Com

A6 All The Secrets
Keyboards  Austin Peralta

B4 Until The Quiet Comes
Bass Guitar  Stephen Bruner

In the last five years, Flying Lotus has become a standard-bearer for 21st-century beat construction by looking forward and backward simultaneously and making music that feels like an exploration. So what happens when such an artist reaches a cul-de-sac? After Flying Lotus' 2010 landmark Cosmogramma, further density was not an option. That album was packed so tightly with rhythms, instruments, and textures that adding more to the mix would have meant risking identity; just a few more samples could have turned the music into an indistinct mush that contains every color at once. Cosmogramma felt like an end game, and the new Flying Lotus album, Until the Quiet Comes, finds Ellison lighting out in a new direction. He's thinking in terms of air, mood, and simplicity. In an interview with the UK magazine The Wire, Ellison described Quiet as his attempt at "a children's record, a record for kids to dream to." While there's nothing cute or naive on the album, you get a sense of what Ellison might mean when it comes to dreaming.

The album's opening section, including "Until the Colours Come", "Heave(n)", and "All In", functions as a sort of miniature suite of downtempo jazz. This is Flying Lotus at its most vibe-heavy and mystical, where rooms are thick with purple incense and it's always 3 a.m. The sound is not new-- tracks like these were a cornerstone of 1990s trip-hop of the Headz comp/Ninja Tune variety-- but the sheer beauty of Ellison's design sets his music apart. This is a quality he shares with the very different Ricardo Villalobos: By pulling back and giving his meticulously-constructed elements room to breathe, Ellison allows us to hear them as if for the first time. "Tiny Tortures" begins with a rhythm that's all bones-- a simulated wood block, snare, and hissy cymbal tracing out an off-kilter beat. Against this backdrop the bass guitar of Stephen "Thundercat" Bruner enters, and the contrast between his gliding, harmonically rich runs and the spare opening is breathtaking. Thundercat's expressive bass work also adds character to the comparatively thick title track, as a gong and handclaps flow continuously like water over rocks while an unstable Dilla-fied keyboard wedges in between the beats. But even here, when there's more going on, the ear can fixate on any one sound and extract feeling from it.

As the album progresses, it changes in feel, but the shifts are organic. If the tracks in the opening section bring to mind an abstraction of spaced-out jazz, elsewhere Ellision conjures the blocky colors of videos games. See the thick 8-bit synths in "Sultan's Request", the curlicue melody in "Putty Boy Strut", the simple refrain of the title track, which makes me think of a digital hero on a quest. These lighter moments are careful and reserved. You can feel Ellison putting a smaller frame around each individual part.

The hushed world Ellison has constructed here is hermetic and internally focused, even for him, and the album's guests don't break the spell. The featured players meet Ellison on his turf and adapt to the landscape of the record. Erykah Badu's connection to Flying Lotus' broader aesthetic is readily apparent, as her sense of mystical earthiness is grounded in tradition but free to wander outside of it. On "See Thru to U", she does away with soul singing in its formal sense and allows herself to become an instrument. The result is a satisfying melding of creative personalities but it wouldn't work on an Erykah Badu album-- it's too vaporous, too unconcerned with personality. The same goes for Thom Yorke's contribution on "Electric Candyman"; Ellison turns him into a ghost, which makes perfect sense.

Following the shattering Cosmogramma, Until the Quiet Comes is disarming at first. It sometimes feels like an experiment in how much can be stripped away while still sounding like Flying Lotus, but the reduction offers a new perspective into what Ellison is about. Los Angeles and Cosmogramma brought to mind the L.A. that thrives on acceleration. The energy here is just as strong, but it's concentrated into a smaller space. So while this might be Flying Lotus' most accessible record, it's less about being pleasant and more about deep focus. Each of these 18 tracks tends to introduce one or two emotional or musical elements and meditate on them for a brief time before easing back into silence. Quiet is a series of suggestions or clues and it always feels just out of reach, but that leaves a lot of room for the listener. The surface is a gorgeous invitation to return and see if you can figure out what it all means

This video is incredible - perfectly directed / edited. It works so will with the track.


Flying Lotus - See Thru To U feat. Erykah Badu

I really see the Sun Ra influence in this song

In an interview with the UK magazine The Wire, Ellison described Quiet as his attempt at "a children's record, a record for kids to dream to." While there's nothing cute or naive on the album, you get a sense of what Ellison might mean when it comes to dreaming