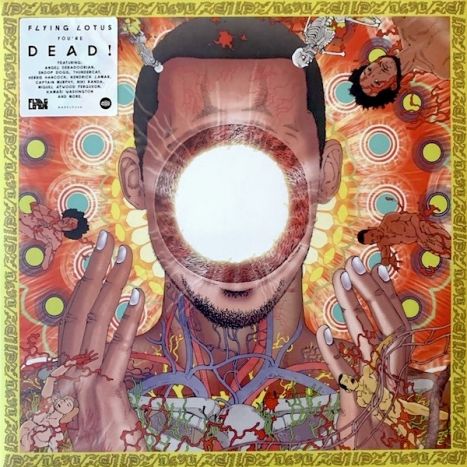 Skip to the beginning of the images gallery
Details
Flying Lotus - You're Dead!


Notes
D6 is a bonus hidden track that is not mentioned on the release.

This latest album feels the most consistent and from start to finish, is a cohesive, nearly perfect work of art.

However, if you're going into this expecting straight hip-hop all the way through, you're sure to come away disappointed. "Never Catch Me" featuring Kendrick Lamar is probably the closest thing to a hip hop track this album contains (and if you haven't seen the video for it, do yourself a favor, go to YouTube and watch it; it's the best music video released this year) and the rest of the album is peppered with tracks that call back everything from Miles Davis's "Bitches Brew" to The Roots "Phrenology" mixed with some of the stranger, funkier Outkast tracks you may have heard. It's hard to explain what you get in this album but one thing's for sure. Flying Lotus is easily one of the most daring artists out there now, completely unwilling to go along with people's expectations. It's almost as if free form jazz, electronica, hip-hop and progressive music joined in creating a life form consisting of nineteen unified components that have a central running artery coursing throughout.

The first four tracks are brief and fly past fast sounding like different movements of a single piece. "Never Catch Me" is a trippy piece with Kendrick Lamar. "Dead Man's Tetris" features vocals by Flying Lotus (as Captain Murphy) and Snoop Dogg. "Turkey Dog Coma" is a shimmery tempo-shifting piece. "Siren Song" features Angel Deradoorian's vocals against a quivery backdrop. The brief "Descent Into Madness" features Thundercat. Captain Murphy appears again on "The Boys Who Died In Their Sleep". The shimmery "The Potential/The Beyond" features Niki Randa (with her voice sounding like a cascading waterfall), while Kimbra features on closing cut "The Protest".

The only other album I've heard this year that's in a similar vein is Taylor Mcferrin's "Early Riser". Just amazing