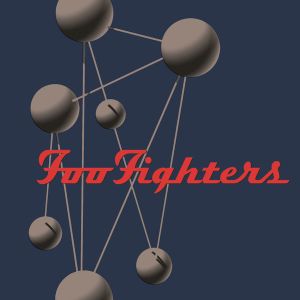 Foo Fighters - The Colour And The Shape

The MP3 is available through a coded dropcard redeemable at www.myplaydigital.com/thecolourandtheshape
Only residents of the US can redeem this code which is valid "through November 21, 2012".


The Colour and The Shape
In my opinion, the finest work by the group and best writing by Grohl before or since. The LP that truly turned me onto the Foos, eventually earning them the spot of favorite. The debut was great, yet a little repetitive; This one is perfect in all ways.

Every song hits an individual chord with the soul, and each selection sounds genuinely heart felt. A concept album (of sorts), the order of songs is perfect as well, creating a great finished UNIT which deserves to be listened to straight through:

1)Doll - Great opener. Short and sweet, it portrays Grohl's timid and overwhelmed feeling at the beginning of the story. Each passing song is filled with more and more confidence until the triumphant end.

2)Monkey Wrench - One of the more publicly recognizable tunes on the platter, it has an awesome beat and is one of the better songs on the LP without a weak spot.

3)Hey, Johnny Park! - My second favorite song and one which, for some reason, always seems to be overlooked. Great intro, terrific lyrics, and a very unique aura qualify this one as an A+.

4)My Poor Brain - The song that took me the longest to open up to; after listening to it enough it really starts to stick. Very powerful sound, after a peculiar start.

5)Wind Up - Another hidden gem everyone tends to pass over. Somewhat bitter and vengeful, it definitely deserves a listen.

6)Up In Arms - Cool little song. Changes from slow to fast halfway through, it really becomes quite uplifting.

7)My Hero - Gets quite a bit of radio play, still. Many interperatations exist concerning its lyrics, making it very intersesting. Great drum opening, cathcy riff, and POWERFUL lyrics.

8)See You - One of the more innocent and laid back songs. Fun to listen to and it is reported that Grohl joked that it was his "favorite" on the album.

9)Enough Space - Strange song, but like everything else, it fits. Loud sound and fast pace keep things moving in a good direction.

10)February Stars - Slow, emotional lyrics for the first half, followed up by a second half containing strictly the chorus, set to an awesome distorted sound.

11)Everlong - This is it. The most famous Foo song, most widely played, and my personal fav song by anyone. Horribly infectous da-da-da-dada-da sound, poigniant and beautifully vocalized lyrics, and an almost haunting quality all serve to leave an indelible impression on the mind.

12)Walking After You - Slow, acoustic love(?) song. Very interesting and thought provoking lyrics. A good one.

13)New Way Home - Simply brilliant ending. Caps off the concept in an ingenious fashion. Ends with Grohl's shouting of the lyric "I'm not scared" (whereas in "Doll" he claims, "I've never been so scared"), completing the whole confidently re-born motif. One of the best 6 minute songs I've ever heard.

Probably the best album to ever be released by the Foo Fighters, "The Colour & The Shape" further solidified Dave Grohl stepping out of grunge's shadow and making peace with the ghost of Kurt Cobain.

Just about all the songs here on this album are catchy and seem made for radio friendly, but underneath that surface is a demonically comical feel combined with a lot of emotion.

On songs like the short opener "Doll", "February Stars", and the classic single "Everlong" you can hear the raw emotion in Grohl's voice, and that is something that no one can fake.

"Monkey Wrench" is still a great song, no matter how much it got overplayed, although another session of "My Hero" may prove nerve wracking considering it can be heard just about anywhere.

Other great songs like "Hey! Johnny Park", "My Poor Brain", "See You", and "Walking After You" (featured on the X-Files film soundtrack) are all great songs as well, and the band's tight musicianship rounds out this excellent package.

I love the bass in the chorus


Foo Fighters - Walking After You

For a legendary rock band like Foo Fighters, this kinda-sound-accoustic song is just purely beautiful

Taylor's drums have the best tone ever.