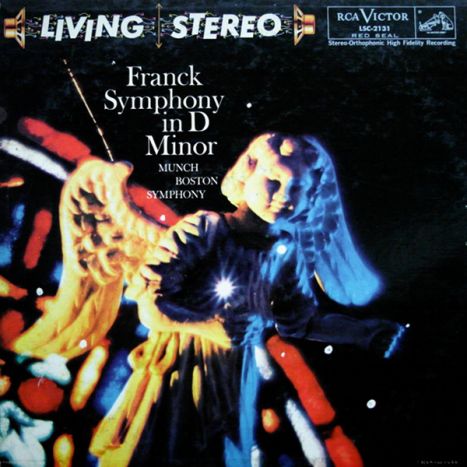 Cover is VG+ VG++ has some spine wear (see our pic)

Made in Canada. Cover Printed in the USA.
'Shaded Dog' Labels
This is a TRUE STEREOPHONIC record
(C) 1958

Boston Symphony Orchestra/Charles Munch: Munch's driving tempos and innate feeling for Franck's symphonic drama make this one of the most satisfying performances available.

..And yet Franck's symphony starts with a veiled - or actually pretty obvious - homage to German music, to Beethoven's last quartet. Franck's opening theme is a rewrite of the questioning phrase to which Beethoven appended the words, "Muss es sein?" ("Must it be?") in the last movement of his final string quartet. Franck's theme, marvellously mobile in its modulatory potential, sets out, in its slow tempo, much of the material that the whole huge first movement will be based on. Transposed into an Allegro, you hear the same motto idea of the very opening, before the slow music is repeated in a new key. After its stormy beginning, the allegro proper climaxes in two radiant themes, both in F major, the first gently lyrical, and the second radiantly joyous. It's a feature of this symphony that while Franck is an inveterate modulator - his harmonies often shift like quicksand, something you hear particularly in the central development section of this movement, which starts with a startling move from F major to B major, achieved in just a few bars - his tunes are remarkably stable, like this joyous melody that's the reward for all that symphonic sound and fury. The lugubrious intensity of that slow introduction isn't easily forgotten, however, and it returns to catalyse the reprise of the movement's main themes, and after another appearance of that radiant tune, the movement ends with a vision of the slow motto theme, now in a major key.