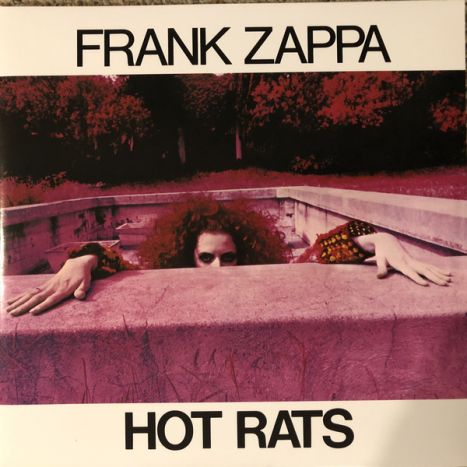 As per sticker on shrink-wrap:

4. Little Umbrellas
5. The Gumbo Variations
6. It Must Be A Camel

Frank Zappa's first solo album, Hot Rats is a far-cry from the da-da adventures and audio collages of the original Mothers of Invention. Mostly instrumental and filled with long jams between Zappa, Jean-Luc Ponty and Ian Underwood, this slickly-produced album--one of the first 16 track recordings made--is filled with hummable tunes. The opening track, "Peaches en Regalia," is one of Zappa's most enduring songs and the album's only vocal track, "Willie the Pimp," is by Zappa's long-time friend Don Van Vliet, a.k.a. Captain Beefheart

After releasing a "mother lode of Mothers" (of Invention) classics, by 1969 leader Frank Zappa was ready to break through other musical barriers that were still holding popular music in a conservative headlock. Being one if not the first album to be recorded using 16 tracks (twice the number being used at the time on both sides of the Atlantic), Hot Rats became a leading edge in both modern recording technology and the evolution of jazz/rock-fusion. Mostly instrumental, it features six original compositions; three loose jam pieces, the remainder being tight ensemble arrangements. Some of the finest players around come together in varying combinations, all-the-while showcasing FZ's guitar virtuosity. Among others, Lowell George of Little Feat fame lends guitar, jazz violinists extraordinaire Don "Sugarcane" Harris and Jean-Luc Ponty plus fellow Mother Ian Underwood's keyboard and woodwind work, complete the leader's advanced vision. Mastered and cut directly from the original analog master tape by Bernie Grundman under the supervision of Gail Zappa.