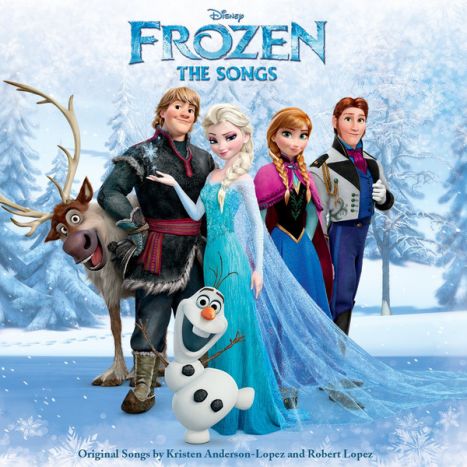 
A1 Frozen Heart
A2 Do You Want To Build A Snowman?
A3 For The First Time In Forever
A4 Love Is An Open Door
A5 Let It Go

Youll never want to let it go after taking a listen, as the soundtrack for Frozen, Walt Disney Animation Studios latest film, freezes your mind (and ears) in captivation. The tunes by Avenue Q songwriters Kristen-Anderson Lopez and Robert Lopez, as well as the strong score by Christophe Beck, swirl together in perfect rhythm.


The combination of songs  worthy of being on your iPod playlist  and powerful tracks make Frozen not only one of Disneys best soundtracks in recent years, but also one of the best film soundtracks you can purchase this year or any year.

The sound quality is excellent, and there is no background noise. The silent gaps twixt tracks are silent as they should be. The songs are well produced and easy to follow (maybe over-produced but what do you expect with Disney?)

1. Frozen Heart The brute voices behind this opening track, all unified and macho in the vein of Ill Make a Man Out of You from Mulan and Song of MorDu from Brave, are strong in vocal quality and attitude. This icy force, both foul and fair, has a frozen heart worth mining, they chant. The song swings in an entrancing motion as the men warn about the perilous ice. TOP 5 TRACK

2. Do You Want to Build a Snowman? This narrative follows sisters Anna and Elsa as they grow up hidden away in the Arendelle castle. There are three sections to this, based on their progressive ages. Each section takes the core theme and finds new ways to spin the lyrics. The funniest line is when Anna refers to talking to the walls, specifically a portrait of Joan of Arc. The impending-doom orchestration (matched with the scene when the parents are essentially washed away) floods into the track perfectly to drive home the sadness.

3. For the First Time in Forever Who would have guessed that Kristen Bell and Idina Menzel would make such a nice duo? Bell adds some humor with her effervescent spirit and amusing lyrics, whereas Menzel lends the signature Broadway voice. You know a song provides further significance when it moves the story, as opposed to stops the film completely, and this one perfectly represents the former. First Time conveys Annas hopefulness and openness, contrasting with Elsas close-minded and fearful vibe.

4. Love Is an Open Door Though this song verges between radio pop and Disney cliché, what makes Annas and Hans romantic duet in Frozen absolutely wonderful is its honesty. It showcases the beauty and awkwardness of early love in a format that encourages you to hum along. Plus, the lyrics are just plain fun. Our mental synchronization can have but one explanation exemplifies this. Santino Fontana wows whenever you hear his voice, and he complements Bell very well here.

5. Let It Go How much do I love this song? I LOVE this song. But what makes Elsas power ballad, where she releases her emotions into the cold air and yearns to forget the past, so special? Three reasons: Idina Menzel; the spectacular instrumentation; and the scene in which this is set. Disney has a home run for an Oscar here, as this takes the I want song to another degree by turning it inside out and changing this to a I dont want song. Its time to see what I can do, to test the limits and break through, she exudes. This song contains many sections that increasingly demonstrate Elsas willingness to break free from her inner troubles. Let cover versions performed by young musical talents take YouTube videos by storm in the months and years to come. TOP 5 TRACK

6. Reindeer(s) Are Better Than People Disappointingly, the golden voice of Jonathan Groff only has one opportunity to enter the soundtrack, and its this brief piece here. Its quite witty and funny, especially when he responds to his own impersonation of Sven.

7. In Summer Dont you just want to hug Olaf? Josh Gads musical number, as the snowman oblivious to the dangers of heat, accomplishes parody and tongue-in-cheek humor as successfully as any of the Enchanted pieces. Part ragtime and part jazz, In Summer warms your heart as you likely start tapping your feet. The omission of the word puddle is the cherry on the icing on this heap of melting snow.

Frozen: Do You Want To Build A Snowman?

For The First Time in Forever