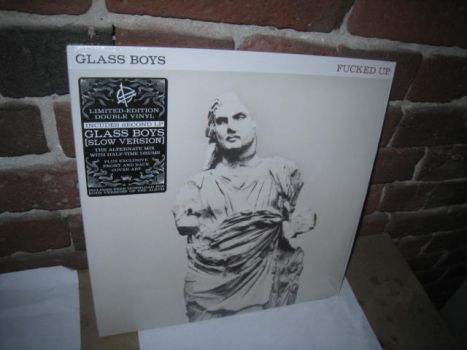 
Musically, Glass Boys carries echoes of some of the more ragged and adventurous bands from America's punk past (Husker Du, Dinosaur Jr.), but it also has some of the anthemic charge of the Who and the guttural intensity of Negative Approach. Singer Damian Abraham still growls like a demon, but he's found more range and depth in his bark.


Drummer Jonah Falco does something innovative on the LP, adding two separate drum tracks, one of them in half-time, adding a psychedelic, disorienting feel. The triple-guitar battalion of Mike Haliechuk, Ben Cook, and Josh Zucker still builds symphonies out of feedback and power-chords, but this time around, there's less emphasis on world-crushing riffs and more on world-creating textures. Bassist Sandy Miranda is now even more a part of that storm, her instrument blurring in with that overwhelming guitar roar.


Drummer Jonah Falco recorded alternate, "slower" drum parts for Fucked Up's latest release, Glass Boys. The reasoning is anybody's guess. Extra time Extra creativity Disagreements over final song versions (A tweet by frontman Damian Abraham places the blame/responsibility on guitarists Mike Haliechuk and Jonah Falco). It doesn't matter. The slower, halftime version of Glass Boys, available on limitededition vinyl is a wonderful release that could just as easily stand on its own. In fact, one may wonder why it wasn't made the "official" version.

As opposed to the band's 2011 release, David Comes To Life, Glass Boys isn't a concept record. The only protagonist is the band itself (with Abraham as its mouthpiece), with lyrics that are more personally introspective. Fucked Up as a band find themselves to be more on the inside than out (critical acclaim and Canada's prestigious Polaris prize, awarded to the band in 2009, can do that). Abraham is not above critical selfreflection, however. "We ushered in all that corrupts/Now we're drowning in the glut," he bellows on "The Great Divide."


Calling this version "slow" is a bit of a misnomer, as the music isn't slowed down, nor are the arrangements any different. A slower and simpler drum track was used rather than the four (!) tracks of drums used on the "official" version. It doesn't create a slower song, but it does show how dynamic the interplay is between the band's members. Giving more space creates a different kind of tension, and the songs retain their heaviness and bombast. I instantly thought of "Ocean Size" and "Mountain Song" from the classic Jane's Addiction album, Nothing's Shocking. The drums don't determine the song, it's the space between the beats.


Fucked Up is a band that lives up to their name, as they can be difficult to figure out. Following up a lengthy concept album with alternate versions of the same record adds to the band's reputation as hard to pigeonhole. The casual fan recently turned on to the band will be interested in hearing the different version at some point. The Fucked Up collector nerd and completionist will need to have it. And they should.


Fucked Up - Paper The House


Fucked Up - Led By Hand