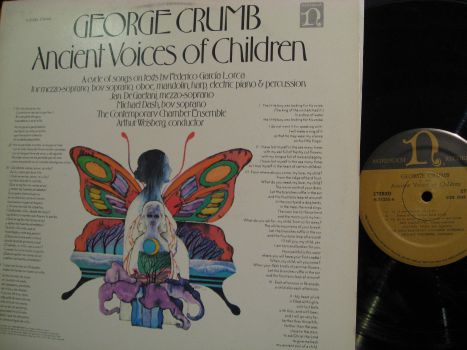 Dances Of The Ancient Earth (For Oboe, Mandolin, Harp & Percussion)
2:22

Ancient Voices of Children was composed during the summer of 1970 on commission from the Elizabeth Sprague Coolidge Foundation, while I was in residence at Tanglewood, Massachusetts. This work forms part of an extended cycle of vocal compositions based on the poetry of Federico García Lorca which has absorbed much of my compositional energy over the past eight years. Other works in the cycle include Night Music I (1963) for soprano, keyboard, and percussion; four books of Madrigals (1965-69) for soprano and a varying instrumental combination; Songs, Drones, and Refrains of Death (1968) for baritone, electric instruments, and percussion; and Night of the Four Moons (1969) for alto and four instrumentalists. Ancient Voices of Children was first performed on October 31, 1970, as part of the Coolidge Foundation's 14th Festival of Chamber Music at the Library of Congress in Washington, D.C., by the same performers involved in this recording.

In Ancient Voices of Children, as in my earlier Lorca settings, I have sought musical images that enhance and reinforce the powerful, yet strangely haunting imagery of Lorca's poetry. I feel that the essential meaning of this poetry is concerned with the most primary things: life, death, love, the smell of the earth, the sounds of the wind and the sea. These "ur-concepts" are embodied in a language which is primitive and stark, but which is capable of infinitely subtle nuance. In a lecture entitled Theory and Function of the "Duende", Lorca has, in fact, identified the essential characteristic of his own poetry. Duende (untranslatable, but roughly: passion, élan, bravura in its deepest, most artistic sense) is for Lorca "all that has dark sounds ... This 'mysterious power that everyone feels but that no philosopher has explained' is in fact the spirit of the earth ... All one knows is that it burns the blood like powdered glass, that it exhausts, that it rejects all the sweet geometry one has learned ..."

The texts of Ancient Voices are fragments of longer poems which I have grouped into a sequence that seemed to suggest a "larger rhythm" in terms of musical continuity. The two purely instrumental movements -- "Dances of the Ancient Earth" and "Ghost Dance" -- are dance-interludes rather than commentaries on the texts. These two pieces, together with the 3rd song, subtitled "Dance of the Sacred Life-Cycle" (which contains a rising-falling ostinato bolero rhythm in the drums), can be performed by a solo dancer.

The vocal style in the cycle ranges from the virtuosic to the intimately lyrical, and in my conception of the work I very much had in mind Jan DeGaetani's enormous technical and timbral flexibility. Perhaps the most characteristic vocal effect in Ancient Voices is produced by the mezzo-soprano singing a kind of fantastic vocalise (based on purely phonetic sounds) into an amplified piano, thereby producing a shimmering aura of echoes. The inclusion of a part for boy soprano seemed the best solution for those passages in the text where Lorca clearly implies a child's voice. The boy soprano is heard offstage until the very last page of the work, at which point he joins the mezzo-soprano onstage for the closing vocalise.

The instruments employed in Ancient Voices were chosen for their particular timbral potentialities. The pianist also plays toy piano (in the 4th song), the mandolinist musical saw (2nd song) -- although in this recording a separate player is used for the saw -- and the oboist harmonica (4th song). Certain special instrumental effects are used to heighten the "expressive intensity" -- e.g., "bending" the pitch of the piano by application of a chisel to the strings (2nd song); use of a paperthreaded harp (in "Dances of the Ancient Earth"); the frequent "pitch-bending" of the oboe, harp and mandolin. The mandolin has one set of strings tuned a quarter-tone low in order to give a special pungency to its tone. The three percussionists command a wide range of instruments, including Tibetan prayer stones, Japanese temple bells, and tuned tom-toms. The instrumentalists are frequently called upon to sing, shout, and whisper.

In composing Ancient Voices of Children I was conscious of an urge to fuse various unrelated stylistic elements. I was intrigued with the idea of juxtaposing the seemingly incongruous: a suggestion of Flamenco with a Baroque quotation (Bist du bei mir, from the Notebook of Anna Magdalena Bach), or a reminiscence of Mahler with a breath of the Orient. It later occurred to me that both Bach and Mahler drew upon many disparate sources in their own music without sacrificing "stylistic purity".

It is sometimes of interest to a composer to recall the original impulse -- the "creative germ" -- of a compositional project. In the case of Ancient Voices I felt this impulse to be the climactic final words of the last song: "... and I wil go very far ... to ask Christ the lord to give me back my ancient soul of a child."
More Information
Please sign in with your email address or Create an Account.
New Products
Compare Products
Compare
Clear All
You have no items to compare.
My Wish List
Last Added Items
Go to Wish List
You have no items in your wish list.
Vinyl Records Vancouver
Categories
Help
Quick Link
Newsletter