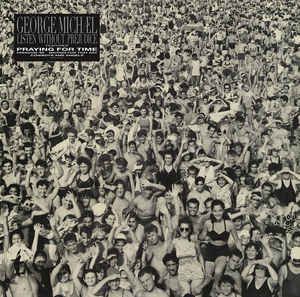 Heavyweight vinyl pressed by Sony Music in celebration of the album's 25th Anniversary. Includes download card. Remastered to sound like it never has before

The release has been delayed from being officially released a number of times, with release dates given as follows:
11 November 2016
3 March 2017 (Following George Michael's sudden death on Christmas Day 2016)
May 2017
20th October 2017 (current and actual official release date)

A number of copies are known to have been mistakenly available despite the cancelling of release dates.

George Michael's second post-Wham! outing, Listen Without Prejudice could not have been more appropriately titled. Following on the booty-shakin' heels of Faith, Listen found Michael being more serious than sassy.
"Freedom 90" had a strong groove, a catchy melody, and of course, the sex-bomb video. The contemplative tone of the album is best illustrated by the other hit that it spawned, "Praying for Time." Michael took several risks on the album. "They Won't Go When I Go," (not a Michael composition) was almost cryptic, and "Cowboys and Angels" was a lament of a different kind.
More Information
Please sign in with your email address or Create an Account.
New Products
Compare Products
Compare
Clear All
You have no items to compare.
My Wish List
Last Added Items
Go to Wish List
You have no items in your wish list.
Vinyl Records Vancouver
Categories
Help
Quick Link
Newsletter