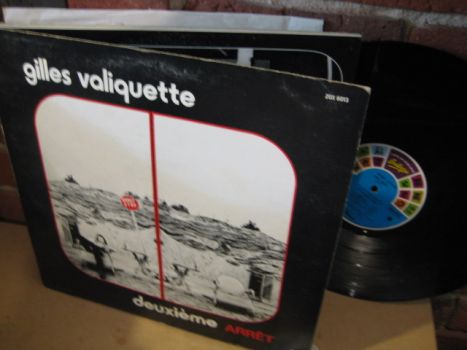 Singer, songwriter, guitarist, record producer, b Montreal 7 Apr 1952. Beginning his guitar studies at 12, he continued his musical training 1967-70 at the Lionel-Groulx College and then at the St-Laurent Cegep in Montreal. During this time he formed the group Someone, with which he made two singles, one for Visa and one for Canama. At the end of 1971 he joined Marie-Claire and Richard Séguin, and the following year he became Jacques Michel's accompanist. At the same time he composed and occasionally performed in student cafés throughout Quebec as well as in boîtes à chansons, including La Butte à Mathieu in Val David and Le Patriote in Montreal.
In 1972 Valiquette made his first LP, Chansons pour un café (Zodiaque ZOX-6008) and was described in La Presse (10 Mar 1973) as having 'an easy-going and melodious style, infinitely personal yet never obscure.' He then toured in Quebec and made a second LP, Deuxième Arrêt (1973, Zodiaque ZOX-6013), from which the song 'Je suis cool' was popular.

In 1980 he played the role of Roger Roger in the rock musical Starmania presented at the Comédie nationale theatre in Montreal (recorded on Beaubec BB-106). In 1982 Valiquette turned to computer recording techniques and set up one of the first fully computerized studios in Quebec. Valiquette has produced records for the singers Jim (Corcoran) and Bertrand (Gosselin), Plume Latraverse, Daniel Lavoie, Robert Paquette, Gilles Rivard, and Richard Séguin, among others. He also established a school of music computer applications, MusiTechnic. By 1991 his own recordings had been reissued on digital discs. Among his best known songs are 'Quelle belle journée,' 'Fais attention,' 'Samedi soir,' 'Sous un soleil d'été,' 'Un peu de bonheur,' and 'Blanc après noir.'
More Information
Please sign in with your email address or Create an Account.
New Products
Compare Products
Compare
Clear All
You have no items to compare.
My Wish List
Last Added Items
Go to Wish List
You have no items in your wish list.
Vinyl Records Vancouver
Categories
Help
Quick Link
Newsletter