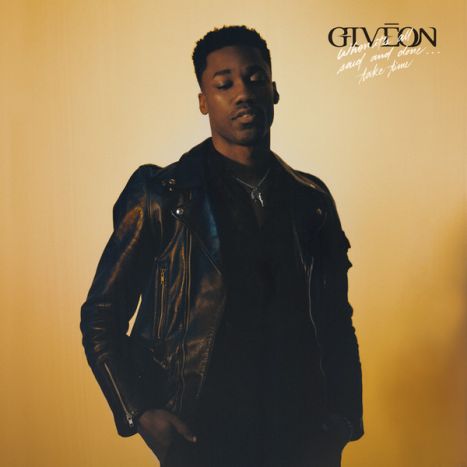 Giveon – When It's All Said And Done... Take Time

Label:
Epic – 19439880621
Format:
Vinyl, LP, Compilation, Stereo
Country:
US
Released:
2021
Genre:
Funk / Soul, Blues, Pop
Style:
Contemporary R&B, Rhythm & Blues
Tracklist
A1 The Beach
A2 World We Created
A3 Take Time (interlude)
A4 Favorite Mistake
A5 This Ain't Love
A6 Heartbreak Anniversary
A7 Like I Want You
A8 Vanish
B1 When It's All Said And Done
B2 Still Your Best
B3 Last Time
Featuring – Snoh Aalegra
B4 Stuck On You
B5 All To Me
Companies, etc.
Copyright © – Epic Records
Phonographic Copyright ℗ – Epic Records
Distributed By – Epic Records
Record Company – Sony Music Entertainment
Lacquer Cut at – Nashville Record Productions
Pressed By – United Record Pressing
Barcode and Other Identifiers
Barcode (Text): 1 94398 80621 1
Barcode (Scanned): 194398806211
Matrix / Runout (Side A): 194382591-1-A NRP ⓤ

"GRAMMY nominated singing sensation Giveon is gearing up for another big year in 2021. The Long Beach native took 2020 by storm and has already landed in stardom, thanks to his vocals on Drake's "Chicago Freestyle," coupled with the release of his own single "Like I Want You." The video has gained over 47 million views on YouTube alone, and the single has reached over 121M WW streams to date across streaming platforms, peaking at #10 on the Billboard Emerging Artist chart and #25 on the Billboard Hot R&B Songs chart. His debut EP Take Time was met with critical acclaim, as everyone from Billboard to NPR recognized this rising star's reach. He even grabbed a song placement on Season 4 of HBO's Insecure with his track "World We Created." - By August, Giveon became the inaugural artist for Spotify's Are & Be Spotify Singles campaign, as he reworked "Like I Want You" (dubbed "Side A") with "Side B" being a cover of D'Angelo's classic "Untitled (How Does It Feel)," serendipitously also recorded at NYC's Electric Lady Studios where D'Angelo recorded the hit. His new EP When It's All Said And Done, picks up where Take Time left off, detailing the peaks and valleys of a love story gone awry. With a Rat Pack-style vibe and elevated storytelling woven tightly through his music, Giveon is here to give R&B the re-up it needs. And he's just getting started."