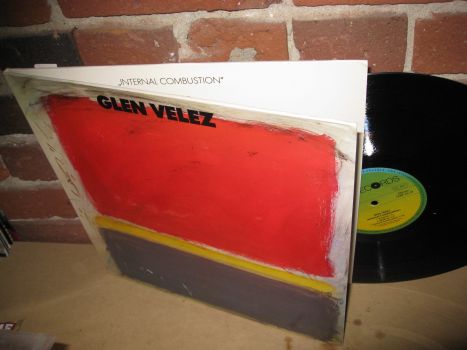 Skip to the beginning of the images gallery
Details
Glen Velez and Layne Redmond - INTERNAL COMBUSTION .

Biography by Frank Eisenhuth
Glen Velez, a Texan of Mexican origin, is one of the most outstanding living percussionists. His instrument is the frame drum, the origins of which can be traced back as early as ancient Mesopotamia. Velez not only plays the frame drum, he studied its rich history and manifold uses as a ceremonial instrument in ancient rituals, and thus also became a musicologist in this field. He not only presents his expertise in a wide variety of performances and collaborations with other artists  he also developed his own teaching method for learning to play the frame drum, creates instructional videos on this method, teaches workshops throughout the world, and publishes books and articles on the subject. He even designed his own frame drum series for REMO, a drum manufacturer. Due to this extensive work, he is to be considered the world's leading expert on this instrument and one of the most innovative fusion musicians, easily crossing borders between rock, jazz, world, classical, and postmodern music. Furthermore, he must be credited with having managed to merge different frame drum playing techniques into a composite approach which basically denotes his own unique style. At the age of seven Glen Velez had been exposed to the wonders of the percussion world by his uncle, a drummer. So the youngster had discovered his passion quite early. His teenage years he spent mostly listening to bebop recordings and trying out different percussion instruments for playing jazz. However, in 1967, at the age of 18, he shifted his interest from jazz percussion to classical percussion and was attracted to the cultural melting pot of New York and enrolled at the Manhattan School of Music to study percussion with Fred Hinger. Hinger introduced him to the idea of circular motion in music as opposed to conventional Western linear progression. Thus, Glen Velez also became acquainted with the music of the two great 20th century composers John Cage and Karlheinz Stockhausen. In order to absorb all the new things he had learned about music at his first stay in New York he decided to return to Dallas in the beginning of 1969 and to practice frantically what he had learned on the East Coast. In the meantime, he also joined the army where he played in a band and continued to refine his percussion skills. In 1973, he was back in New York and started recording with minimalist Steve Reich, performing in his ensemble. This fruitful partnership lasted fifteen years. In the beginning of the '80s, however, Velez became immensely interested in hand drumming, shifted his focus on this specialized field of percussion and discovered the frame drum as his passion. This time period also marks his breakaway from classical percussion; according to his own words, he missed the improvisational element in this field. In 1983, he established contact with Paul Winter and became a member of his Paul Winter Consort, formed in 1967 and one of the first exponents of world music. Besides the work in this group, Glen Velez started to release solo recordings which all feature dazzingly polyrhythmic percussion on the frame drum and a wide variety of other percussion instruments as well as Velez' characteristic overtone singing. His solo debut Handance, recorded with drummer Layne Redmond, was released in 1984. "Handance" is the name Velez gave to his frame drum playing teaching method. This method regards voice and body movements as a unity with the actual frame drum playing; it is demonstrated in the instructional video The Glen Velez Handance Method which he created for teaching purposes. In 1984, Velez signed with the renowned German fusion label CMP Records which he stuck with for the next decade. He continued his collaboration with Layne Redmond on his second solo release, Internal Combustion, from 1985. For Seven Heaven (1987), Velez added the atmospheric Bansuri flute textures of Steve Gorn. John Cage acknowledged Glen Velez' mastery in 1989 by writing the piece "Composed Improvisation for One-sided Drum with or without Jangles" especially for him. In the same year, Velez released the beautiful Assyrian Rose and expanded the colors of his sound worlds by John Clark on French horn and Howard Levy on piano and harmonica. Velez started the '90s with Ramana (1990) and Doctrine of Signatures (1991), the latter recorded without Layne Redmond's support, but Gorn took part again. In 1993, Velez was back with another recording, Border States, which motto might be "complex and spiritual music with simple instruments." Shortly afterwards he released Pan Eros and stopped recording for CMP Records. 1996 was the year of a collaboration with Spanish saxophone and clarinet player Javier Paxariño on his project Temurà as well as Velez' own release Rhythmcolor Exotica which features his newly formed Handance Ensemble. 1998 saw the end of Glen Velez' membership in the Paul Winter Consort. Since then, Velez, who according to his own words never listens to an album he has made, but moves on to the next project, has been working exclusively as a soloist, but carries on to collaborate with a variety of musicians in different genres. These included artists like singer/songwriter Suzanne Vega, fusion guitarist Pat Metheny, classical clarinetist Richard Stoltzman, Indian tabla player Zakir Hussain, and Swedish jazz bassist Jonas Hellborg. Rhythm of the Chakras, subtitled "Drumming for the Body's Energy Centers" and released the same year, was the result of Velez' study of Indian chakras, focal points of bodily and psychic interaction in Hinduism and Buddhism, and their attempted transformation to music. In 1999 Glen Velez was voted Best World Beat Percussionist by DRUM! magazine. One year later, he released Breathing Rhythms. Like its predecessor, the album continues to explore music as a spiritual and healing force, an understanding which the "shaman with a briefcase" (Paul Winter) has gained after many years of studying percussion music as an ancient heritage and a medium for self-exploration.

Review by Jason Ankeny
Best known for his work with Steve Reich, Velez is widely regarded as one of the masters of the frame drum; his virtuosity is on display throughout Internal Combustion, which focuses almost solely on his improvisational drumming skills (although Layne Redmond contributes his own frame drum and vocals on two tracks).
More Information
Please sign in with your email address or Create an Account.
New Products
Compare Products
Compare
Clear All
You have no items to compare.
My Wish List
Last Added Items
Go to Wish List
You have no items in your wish list.
Vinyl Records Vancouver
Categories
Help
Quick Link
Newsletter