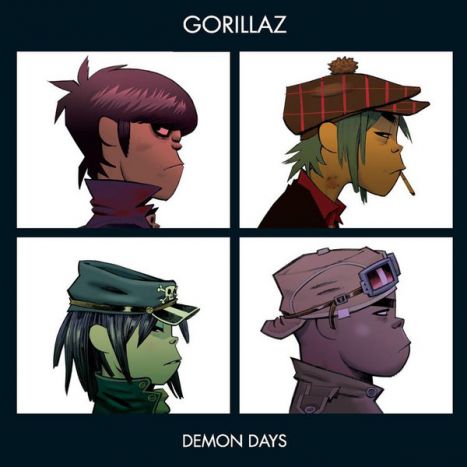 Demon Days, the group's sophomore album, finds lineup changes and an unlikely featured artist. The Gorillaz, who are known for their cartoon illustrations as much as for their music, have exceeded expectations with their follow up to their successful debut album. The new line up is missing Dan "the Automator" Nakamura. In his place, Albarn has joined up with DJ Danger Mouse to keep things moving along. Featured guests include De La Soul, Roots Manuva, Martina Topley-Bird, Shaun Ryder, and surprisingly, 69 year old actor Dennis Hopper delivers narration on "Fire Coming Out of the Monkey's Head".

The record has a very cinematic feel to it. It possesses a lot of build-up and tear-down elements to it. The first few tracks feels like a warm up to the beautiful and chilling, "Dirty Harry", then bursting in with the climax of "Feel Good Inc." the first radio single off the record. Those two really hit hard, and the album doesn't let up until the album's lead out. "El Mañana" and "Every Planet We Reach Is Dead" are equally funky and remarkable tunes. The collaborators are sprinkled throughout the album, which are never overbearing, like on the track "November Has Come," where rap veteran Daniel Dumile (aka "MF Doom") lends a hand. It all leads up to the biggest climax of the album, "Dare". A gorgeously crafted pop song that has "club hit" written all over it (it's one of my favorites). The album starts to calm down over the final three tracks with great tracks like "Fire Coming Out of the Monkey's Head". The tracks work cohesively together, bringing the standout tracks to the forefront nicely