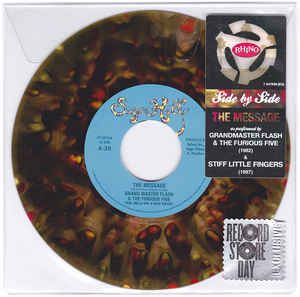 
Flash played illegal parties and also worked with rappers such as Kurtis Blow and Lovebug Starski. He formed his own group in the late 1970s, after promptings from Ray Chandler. The initial members were Cowboy (Keith Wiggins), Melle Mel (Melvin Glover) and Kid(d) Creole (Nathaniel Glover) making Grandmaster Flash & the 3 MCs (with Melle Mel being the first rapper ever to call himself an "MC"). Two other rappers briefly joined, but they were replaced more permanently by Rahiem (Guy Todd Williams, previously in the Funky Four) and Scorpio (Eddie Morris, also used the name Mr. Ness) to create Grandmaster Flash and the Furious Five. Soon gaining recognition for their skillful raps, Grandmaster Flash and the Furious Five pioneered MC-ing, freestyle battles, and invented some of the staple phrases in MC-ing. The group performed at Disco Fever in the Bronx beginning in 1978 .

Grandmaster Flash and The Furious Five were signed to Bobby Robinson's Enjoy Records and in 1979 released the classic "Superrappin'". They later signed to Sugar Hill Records and released numerous singles, gaining a gold disc for "Freedom," and also toured. The classic "The Adventures of Grandmaster Flash on the Wheels of Steel," released in 1981 was the best display of Flash's skills (combining elements of Blondie's "Rapture," Michael Viner's Incredible Bongo Band's "Apache," Queen's "Another One Bites the Dust" and Chic's "Good Times." It also marked the first time that record scratching had been actually recorded on a record.

The group's most significant hit was "The Message" (1982), which was produced by in-house Sugar Hill producer Clifton "Jiggs" Chase and featured session musician Duke Bootee. Other than Melle Mel, no members of the group actually appear on the record. It went platinum in less than a month. In 1983, Flash appeared in the movie "Wild Style" and sued Sugar Hill over the non-payment of royalties. The group split between Flash and Mel before disintegrating entirely. Flash, Kid Creole and Rahiem signed to Elektra Records and continued on as simply "Grandmaster Flash" while Mel and the others continued on as "Grandmaster Melle Mel & the Furious Five."[3] Grandmaster Flash and The Furious Five reformed in 1987 for a charity concert, and in 1988 to release an album that did poorly. Melle Mel closed out the decade by winning two more Grammy awards for his work with Quincy Jones. There was another reunion in 1994, although Cowboy died in 1989 .

this song still touches on issues relavant today ... would somebody please bring back real hip hop