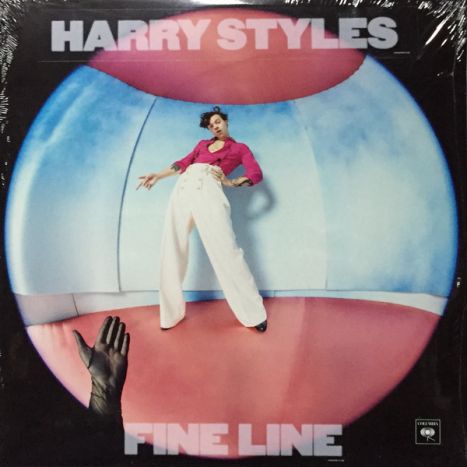 A1 Golden
A2 Watermelon Sugar
A3 Adore You
A4 Lights Up

"In a Rolling Stone profile earlier last year, Harry Styles recalled how he kept watching this interview with David Bowie on his phone for inspiration. In the clip, Bowie offers this chestnut about creativity: “Always go a little further into the water than you feel you are capable of being in. Go a little bit out of your depth. When you don’t feel that your feet are quite touching the bottom, you’re just about in the right place to do something exciting.”

Styles was invoking his own artistic process, illuminating the lengths to which he hoped to travel on his second solo album, Fine Line. He was also demonstrating the invincible oblivion of even our most charming pop stars. For Styles, Fine Line is the sound of an artist plumbing the abyss. For us, it’s the sound of a celebrity sticking his toes in the sand. It’s ostensibly his freedom record, one that indulges his every musical and psychedelic whim. It is also removed enough from One Direction to finally not be judged in relationship to them (unlike his spare and often lovely self-titled debut from 2017). By corralling a new flock of influences—from ’70s power pop and Laurel Canyon folk-rock to the sort-of soul of Coldplay—Styles showcases his gift for making music that sounds like good music.

Which is to say the actual sound of Fine Line is incredible, and most songs have at least one great moment to grab hold of: the clusters of background harmonies on “Golden,” the synth sweeps throughout “Sunflower, Vol. 6,” the strange and alluring pre-chorus on “Lights Up,” a song that embodies Styles’ fluorescent charm, his swagger, his desire to be both weird and adored. He has talked recently about his fear of making music after he left One Direction, the pressure of finding a radio single. But to hear him sing sun-warmed, folk-tinged acoustic rock backed by only a handful of musicians is refreshing. There were easier, more callow roads for him to take".( Pitchfork)