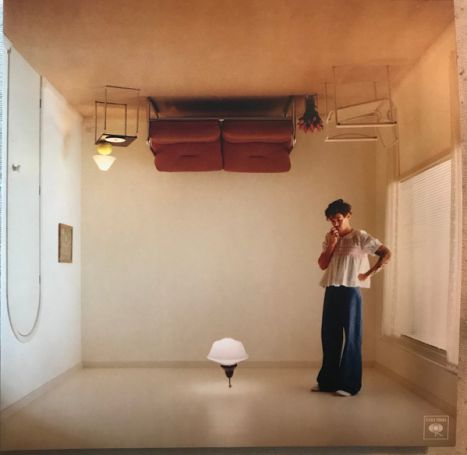 Label: Columbia – 19439997481, Erskine Records – 19439997481
Format:
Vinyl, LP, Album
Gatefold sleeve.
180 gram vinyl.
5”x 7” postcard and 12 page booklet included.
US edition without the Sony Music logo on the back cover.
Barcode: 194399974810
Country: US
Released: May 19, 2022
Genre: Rock, Pop
Style: Indie Pop, Pop Rock
A1 Music For A Sushi Restaurant
A2 Late Night Talking
A3 Grapejuice
A4 As It Was
A5 Daylight
A6 Little Freak
A7 Matilda
B1 Cinema
B2 Daydreaming
B3 Keep Driving
B4 Satellite
B5 Boyfriends
B6 Love Of My Life
. " On TikTok, Harry’s House single “As It Was” is a go-to soundtrack for supercuts of curated domesticity. The state of the boy brand is strong.
On Harry’s House, pleasure is the aesthetic proposition. The album oozes the easy charisma that lifted Styles head and shoulders above his former One Direction colleagues and makes him one of pop’s more compelling live acts. Its sounds—which move through funk, folk, and 2010s Tumblr-pop—are friendly and familiar enough to satisfy passive listening, but deftly executed, with a surplus of style and whimsy that rewards a more active ear. Styles’ previous albums seemed preoccupied with a desire to demonstrate taste and legitimacy via retro-rock pastiche, but here he wears his influences more lightly. The mood is light, too: Opener “Music for a Sushi Restaurant” kicks things off with scatting, scene-stealing horns, and a litany of food references (fried rice, ice cream, coffee on the stove) that conjure a state of goofy, sated bliss. “I could cook an egg on you”: Harry Styles lyric or Denny’s tweet?
Styles kept this record in the family, working primarily with returning collaborators Kid Harpoon and Tyler Johnson. For some artists, an intimate writers’ room can draw out vulnerabilities or create a foundation for risk-taking, but little here suggests that Styles is looking to tap into anything overly profound. The emotional stakes are low: Harry is either wistful for past love, but not too pressed about it, or else drawn to someone new, but not effusively so. He’s “not worried” about who his ex is going home to, despite the nostalgic halo she wears on “Little Freak”; he’s not wine-drunk and despondent, he just has the “grape juice blues.” “Daydreaming,” a skin-deep but richly textured sex fantasy that borrows from the Brothers Johnson, articulates what’s felt on much of the album: Styles is writing inside a reverie, blissfully insulated from life’s extremity."

" Substance sometimes lacks, but style always abounds. Harmonies open like refracted light around the bright, decadent passages of “Daylight” (“If I was a bluebird/I would fly to you/You’d be the spoon/Dip you in honey so I could be sticking to you”). “Satellite” enters into conversation with Ariana Grande’s “NASA” and features a wonderful bit of text painting: Styles sings about “spinning out” while the back half of the song builds momentum and nearly careens out of control. And on an album whose themes are largely generic, a few dots of self-reflexivity sparkle. The third-person talking-to Harry gives himself on “As It Was” invites a burst of empathy. On the slick, salacious “Cinema,” he works in a coded boast about his union with a certain film actor and director—“I bring the pop to the cinema”—over an extended breakdown propelled by plucky rhythm guitar. It’s a moment of ego indulgence, and a rare Easter egg from an artist whose personal life is closely guarded."