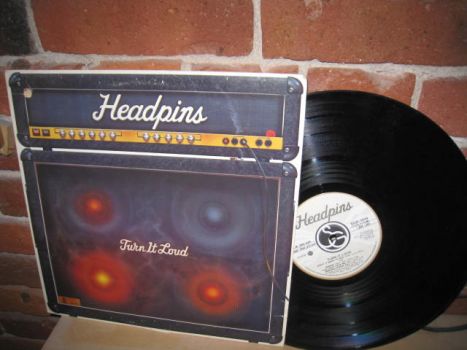 
For those new to the band, this first album is a perfect introduction. Darby Mills is probably the best female rock singer no one knows about. Listening to this album will change that! By the way, Mills is alive and kicking, and The Headpins continue to tour.

Neither is fair. Lee Aaron was a force unto herself...frontman, guitarist, bandleader and manager. The Headpins were far more than just vocalist Darby Mills. Heart was an AOR band with two women, one the lead singer, and Headpins was a straight-ahead hard rock band who just happened to have a female vocalist.

The better comparison might be AC/DC. Like Bon Scott, Darby Mills had a voice that one could hardly imagine lasting for more than two albums...and it didn't. Darby carved out a reputation for excess consumption (above and below the waist) comparable to Scott's in her tragically shortened career, but the band didn't survive her demise, and this album remains the peak of both her career and the career of guitarist Brian "Too Loud" McCloud as well.

Produced by Bill Henderson of Chilliwack, this album packed a twin-Marshall wallop unlike anything of its day produced in Canada, this was a foreshadow of the influence that Vancouver in general, and Little Mountain Sound in particular, would later have on hard rock worldwide, and it stands up today as well as anything from that period.

Headpins - Don't it make ya

These guys have been misfortunate to not have gone much further.