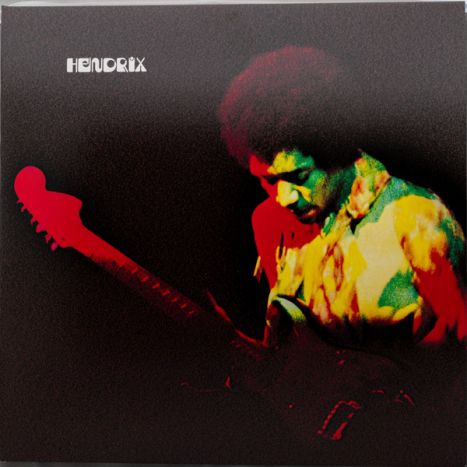 This new, all analog edition of Band of Gypsys has been mastered from the original analog stereo tapes

Every rock fan knows that Jimi Hendrix's three studio recordings are absolutely essential. But I would argue that Band of Gypsys is just as important to own. This is where you get to hear Jimi cut loose. If you have any doubt of Hendrix's guitar genius, this album will quickly dispell that for you.
First of all, the Experience do not appear in this album. Instead, Buddy Miles and Billy Cox fill in for drums and bass respectively. The two provide Jimi with a much looser, funkier rhythm section than the Experience. As for Jimi, there isn't much to say... All you need to know is that Band of Gypsys contains some of the best guitar work of his career...if not THE best of his career. "Who Knows", and "Power to Love" are two standout tracks. But the masterpiece of the album is the 12 minute anti-war jam "Machine Gun". It's a song that has to be heard to believed. I still remember the first time I heard it....I was floored. The entire album is filled with enough passion and intensity to rival that of John Coltrane's Live at the Village Vanguard or Live at Birdland.

It is true that there have been hundreds of fantastic guitarists since the death of Jimi Hendrix. Many of them have much more speed and dexterity than Jimi. Still others are university trained and extremely knowledgeable in music theory. But I have yet to hear a guitarist play something as passionate and emotional as "Machine Gun".

Band of Gypsys is a live album and a project with Billy Cox and Buddy Miles after the Experience project came to an end, by Jimi Hendrix. Released before his death in 1970, it was the last album Hendrix himself authorised, and the only Hendrix album to be released on Capitol Recordsthe result of a settlement regarding a forgotten recording contract he had signed in 1965 before he became famous.

buddy miles is amazing! that fill he does to end the song is powerful!

If a guitar could ever play itself, it would sound like this. Is there a better example of what a genius can do with an instrument than this?