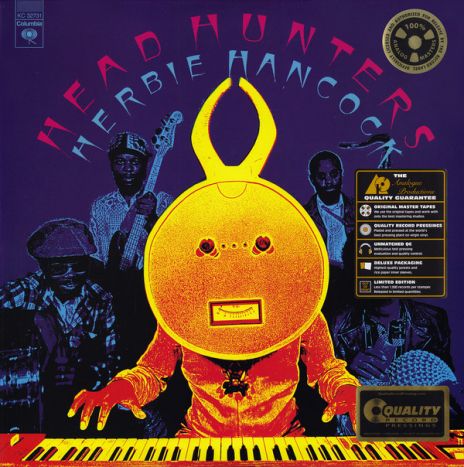 THIS COPY IS NEW but NOT SEALED ( played once)
Country: US
Originally released: 1974
This Release: 2015
Genre: Jazz
Style: Fusion, Jazz-Funk

"Columbia's LP release had decent sound, but Analogue Productions' new vinyl mastering by Ryan Smith at Sterling Sound, takes the sound up several notches from there. The LP is housed in a gorgeous film-laminated jacket from Stoughton Printing  it looks and sounds better than ever." Recording = 10/10; Music = 9.5/10 - Dennis D. Davis, Hi-Fi +, Issue 129

"I've enjoyed Mark Wilder's 1997 CD remastering of Head Hunters for Columbia/Legacy, but every time I played it, I thought I should pick it up on LP. Listening to the new Analogue Productions edition (AAPJ 084) confirmed that suspicion. Hancock's opening synth lines in 'Chameleon' thump soundly in both formats, but have cleaner edges from the new vinyl. More important, as the other instruments join in, each has more room to breathe. Harvey Mason's kick drum is too forward on the CD and crowds the music; on AP's LP, it's audible but in support. Reverb is now audible in the notes of Bennie Maupin's sax, and Paul Jackson's bass, still the funk backbone of the album, isn't as overbearing as it now sometimes sounds to me on the CD. AP's 33.3rpm mastering gives each instrument space, and by deepening the soundstage it humanizes Hancock's electronic keyboards and burnishes some of the high-treble edge they have on the CD. ... This new pressing lets you hear how carefully Hancock constructed the music, and how well he and the other musicians worked together to bring it to life."  Joseph Taylor, SoundStage! Hi-Fi, October 2015


This album started a revolution. "Chameleon" is a staple for any band these days. After getting tired of hearing terrible versions by Gov't Mule and The String Cheese Incidint (Who by the way really are an incident and couldn't play a good song if they got payed a million dollars), I thought that I was finally sick of "Chameleon" Well... I was so wrong! I went back and got out my copy of "Headhunters" and it refreshed my faith in the song. Herbie adds that kind of Disco part and brings the funk up a notch. His whole band really jams on that song. There may be imitators, but Herbie is the only one who can really play "Chameleon" the way it should be played.
"Watermelon Man" is another instant classic. I was really diggin' the crazy tribal screams and the guy blowing on the jugs. "Sly" is also really funky going in and out of the groove, and "Veinmelter" delivers as well. Although I wouldn't label this as "One of my favorites of all time" it is definatley crucial to any collection. Whether you like Jazz, rap, Funk, rock, or whatever... You'll dig this fo' sho'.

I suppose conversations about drug use are inevitable when the song is titled "Vein Melter." The slow tempo & dirge-like melody suggests that the composition is about a drug experience or the sadness of losing a friend or loved one through a drug overdose.