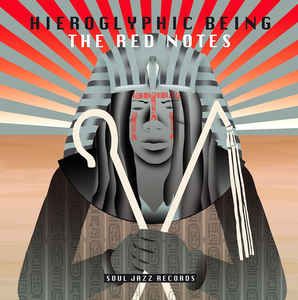 Hieroglyphic Being ‎– The Red Notes

B1 Awake & Energize
B2 Video Jazz

Stunning new album from Chicago’s finest electronic futurist Hieroglyphic Being, aka Jamal Moss, newly released on Soul Jazz Records. This is his third album for the label, following on from The Acid Documents (2015), and African With Mainframes (w/ Noleian Reusse) K.M.T. (2016).

The phenomenally titled "Youth Brainwashing and the Extremist Cults" opens the album with a dizzying storm of whirling backward loops and squelchy synths. Cleverly, Moss takes the edge off the glitchy mayhem by injecting some impossibly cool soulful organ that rides out all the way to the track's conclusion. Despite the sheer amount of things going on, what becomes abundantly clear from the outset is that this is, at its core, is a quintessential Hieroglyphic Being album. It retains his characteristic lo-fi sound and, as such, feels raw and authentic - a throwback to the classic Chicago house sound without ever sounding derivative.

That continues into "The Melody Lingers" with Moss showing a masterful ability to give the various components space as boundless, emblematic spirals of percussion, punched pads and slowly unfurling chiming synths are still given plenty of room to breath. Deftly minimalistic, it's Moss strictly abiding by the less is more approach. "The Seduction Syndrome" keeps things simple as a jazz piano figure is looped over a solid kick drum beat before being joined with flashes of synth and occasional snare. The whole thing grows, snakes and builds until it becomes a heady, hypnotic grooving beast. It's the kind of track that keeps any expectant club crowd in the palm of the DJs hand, hanging on for the drop.

"Awake and Energise" offers ambient sweeps before dextrous jazz bass in the Thundercat mold melds with glitchy IDM all cut with sprinklings of jazz piano and swaying synth chords."Video Jazz" is a classic Chicago house tune with a jazz twist. With a Moog sounding bassline and stuttering beat, Hieroglyphic Being entwines insectile synths with pneumatic classic house chords.

The centerpiece of the album is the 14-minute "Red Notes (original)". An epic, gently expanding piece anchored by a looping bass line and a simple keyboard figure. With the foundations in place, he empties his entire box of tricks all over the track as for near quarter of an hour he demonstrates exactly what he's learned over his many years of making music. He's clearly enjoying himself too, as he weaves chiming notes with chromatic and pentatonic scales, manicured synths and multiple layers of stray percussion. With endless variations of rhythm, you get the sense that he could carry the track on all day.

Born and based in Chicago, Moss’s music embodies two of the cultural foundation blocks of the city’s musical lineage; that of Chicago’s original Acid House sound (c. 1986) - Frankie Knuckles, Phuture, Marshall Jefferson et al, alongside a rigorous experimental sound searching that taps into the cosmic musical lineage of pioneering artist Sun Ra whose Arkestra landed and was based in the city from 1946-61, and the equally pioneering work of The Art Ensemble of Chicago in the 1960s and 70s.

The association with Sun Ra is by no means hypothetical, Moss recorded with the Arkestra leader Marshall Allen and a host of free jazz players for the album Hieroglyphic Being & JITU Ahn-Sahm-Buhl’s ‘We Are Not The First.’ (2015).

Similarly, his relationship to Chicago’s original acid house pioneers of the late 1980s is no hyperbole. Originally mentored by artist/producers Adonis and Steve Pointdexter, Moss also runs his own Mathematics label, releasing a constant stream of new music by foundation acid house pioneers Lil’ Louis, Adonis and many others.

Moss grew up in the south side of Chicago. After being thrown out of the home of his adoptive parents, he then spent three years homeless living on the streets of Chicago, living a nocturnal existence as a gigolo in Chicago’s alternative clubs. He began his career as a DJ at the pioneering Liquid Love parties at Chi-town’s legendary Power House (home of Ron Hardy’s Music Box) around 1989.

What clearly defines Moss’s music is that while sometimes pushing the limits of sound to an ear-splitting dimension of experimentation and DIY-electronics – the music is always clearly a progression of the lineage of black music. In the words of fellow Chicagoans, The Art Ensemble of Chicago, it is simply ‘Great Black Music.’ And yet in this uniquely defined sound, Moss somehow manages to draw into this world elements of industrial music, German electronic music (Cluster, Harmonia etc), Detroit’s sci-fi techno artists (Atkins, Saunderson, Craig) and more.

‘Outsider House’ ‘Afro-Futurist’ ‘Rhythmic Cubism’, Moss’s near indescribable sound plays testament to the notion that he is perhaps the last of the line of producers directly influenced by Ron Hardy at the Music Box, uniquely qualified to write a new chapter of Chicago’s rich musical history.

Red Notes is the prolific artists new revelatory and unique project – in his own words ‘A homage to the Blue Note Jazz sound of Thelonious Monk, John Coltrane, Herbie Hancock’ fused together with the classic Chicago House and Acid sensibilities of Larry Heard, Armando, Adonis et al, into a newly imagined futuristic and barrier-less musical landscape.