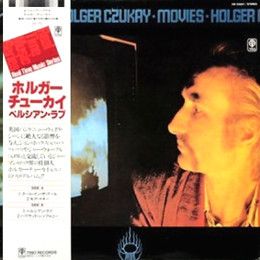 Record is VG++ has light wear (listen to our copy)

Holger Czukay's debut solo album is such an astonishing technical achievement that it deserves 5 stars just for the incredible care and precision that must have been required to painstakingly piece it together.
Pre-samplers, a track like "Cool In The Pool" is a remarkable patchwork of hundreds of tape edits (sit down one day and try and count them - and work put where they came from!). While "Persian Love" is a virtouso piece of editing and exqusite into the bargain.

These two tracks are virtually worth 5 stars on their own. "Cool In The Pool" is a bouncy, funky pop song which will probably be a hit in 10 years time when everyone catches up with Holger!

"Persian Love" is simply one of the most beautiful pieces of music you are ever likely to hear. The idea of sampling a singer from another culture is commonplace nowadays - now a repetitive dance beat would simply be slapped on. Instead Holger weaves a complex and sinuous chord structure around the voice (which is pitch-changed to be either male or female) which is Bach by way of Lee Perry. Over this he overlays exquisite varispeeded guitar in his signature style - like a cross between African high life and Austrian zither, a nice encapsulation of his influences perhaps? As I say, this is sheer brilliance, the only time anything like this had ever been attempted before was in the realms of the classical avant garde (as a former pupil of Stockhausen, Czukay would certainly have been aware of "Gesang der Junglinge", "Telemusik" and "Hymnen") but you can dance to this!

Both longer tracks near the end contain passages that are much closer to prog-rock and jazz-fusion than anything Can ever attempted, as if to say "you think I can't play - well listen to this! However Holger's humour and musicianship shine through and both tracks contain a lot of very interesting and amusing "samples" (not samples of course but scissors and paste tape edits).

As far as I'm concerned this easily the most consistent LP of Czukay's solo career - later albums suffer from a Can-like self-indulgence at times. ..