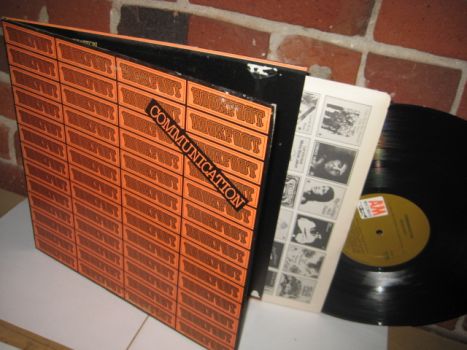 Skip to the beginning of the images gallery
Details
HOOKFOOT - Communication

2nd album after their superb debut. This time, the band is more progressive, but still performing with classic 4 piece hardrock line up. Some real smashers, some more mellow.

Hookfoot was a quintet formed at the end of the '60s as a recording unit by a half-dozen session players associated with Dick James' publishing and later with his DJM Records label. They never made much of an impression on the charts, despite their work being licensed to A&M Records, through which they released four LPs in the U.S.A. Ian Duck (vocals, harmonica), Dave Glover (bass), Roger Pope (drums, vocals), and Caleb Quaye (guitar, vocals) were the original lineup, with Bob Kulick (guitar, vocals) coming in alongside Quaye, and Fred Gandy joining on bass later.

HOOKFOOT, created by Southampton based musicians vocalist Ian Duck, bassist Dave Glover and drummer Roger Pope, was virtually the side act to their day jobs as session musicians for ELTON JOHN. The band started life as an R&B band THE SOUL AGENTS in 1965. A name change to THE FINAL ONE then led to HOOKFOOT. The debut album, which found the band ploughing a similar Country Rock furrow to COCHISE and covering songs by NEIL YOUNG, saw the addition of vocalist Peter Ross.

HOOKFOOT turned up en masse to supply the session music for solo artist JOHN KONGAS debut of the same year on Elektra Records as Quaye, Pope and Glover provided the backing.

The follow up album had HOOKFOOT joined by second guitarist American Bob Kulick. A period of flux followed as Kulick quit (later finding notoriety with session work for KISS and his stints with BLACKJACK, BALANCE, MEAT LOAF and SKULL). To keep things on the move after Glover departed COCHISE guitarist MICK GRABHAM subbed on bass. Third album 'Communication' had the band up to full strength with bassist Fred Gandy.

Glover became a studio engineer in later years working with CINDERELLA among others
More Information
Please sign in with your email address or Create an Account.
New Products
Compare Products
Compare
Clear All
You have no items to compare.
My Wish List
Last Added Items
Go to Wish List
You have no items in your wish list.
Vinyl Records Vancouver
Categories
Help
Quick Link
Newsletter