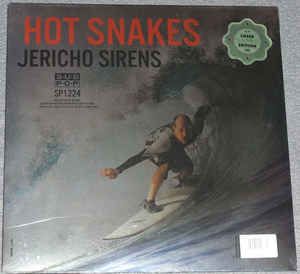 A1 I Need A Doctor
A2 Candid Cameras
A3 Why Don’t It Sink In?
A4 Six Wave Hold-Down
A5 Jericho Sirens

B1 Death Camp Fantasy
B2 Having Another?
B3 Death Doula
B4 Psychoactive
B5 Death Of A Sportsman

The lacquer cutting engineer and pressing plant are identified by the run-out etchings.

Hot Snakes are an American post-hardcore band led by Rick Froberg and John Reis, formed in 1999 in San Diego, California. Reis and Froberg had previously performed together in Pitchfork and Drive Like Jehu, after which Reis had found international success with Rocket from the Crypt. Hot Snakes disbanded in 2005 but reunited in 2011.

Jericho Sirens is a reunion in the high-school sense of the term, corralling everyone who’s ever called themselves a Hot Snake. Where the band’s first two records featured former Delta 72 drummer Jason Kourkounis and their third replaced him with RFTC stickman Mario Rubalcaba (later of OFF! and Earthless), the new album features appearances from both. No matter who’s behind the kit, Jericho Sirens’ unwavering thwack attack and chain-whipped tambourine rattle soundly reassert Hot Snakes’ status as the most merciless band in the Froberg/Reis nexus. Even at their fiercest, Rocket From the Crypt songs were always fueled by a classic rock’n’roll abandon, while Jehu’s art-punk epics balanced the visceral with the cerebral. But on this LP, each of Reis’ and Froberg’s revved-up riffs feels like a nasty sucker-punched elbow to the ribs, each piercing staccato guitar line a finger poking at the bruise.

Jericho Sirens releases the pause button as if Hot Snakes had been locked in freeze-frame for the past 14 years, instantly thrusting them back into action on the frenzied “I Need a Doctor.” With its manic expressions of helplessness and desperation (“I need to be near a toilet!”), the song seemingly invites interpretations tied to America’s current political crisis and ongoing healthcare nightmare. And certainly, the marauding “Death of a Sportsman,” with its graphic depiction of a doomed big-game hunter (“What is left of him ain’t worth sending home!”), works as an unsubtle eat-the-rich metaphor. But Froberg has been the very embodiment of wiry agitation and tinfoil-chewing tension for the past quarter century, no matter who’s running the country. All that pleading for medical attention you hear on “I Need a Doctor”? If you take the band at their word, it’s a simply a request for an MD’s note to skip out of an office Christmas function.