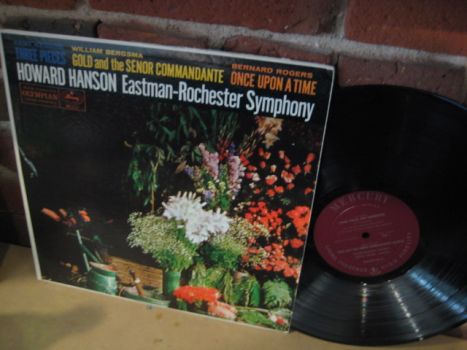 Life and work
Hanson was born in Wahoo, Nebraska to Swedish parents, Hans and Hilma (Eckstrom) Hanson. In his youth he studied music with his mother. Later, he studied at Luther College in Wahoo, receiving a diploma in 1911, then at the Institute of Musical Art in New York City, where he studied with the composer and music theorist Percy Goetschius in 1914. Afterwards he attended Northwestern University, where he studied composition with church music expert Peter Lutkin and Arne Oldberg in Chicago. Throughout his education, Hanson studied piano, cello and trombone. Hanson received his BA degree in music from Northwestern University in 1916, where he began his teaching career as a teacher's assistant.

That same year, Hanson got his first full-time position as a music theory and composition teacher at the College of the Pacific in California, and only three years later, the college appointed him Dean of the Conservatory of Fine Arts in 1919. In 1920 Hanson composed The California Forest Play, his earliest work to receive national attention. Hanson also wrote a number of orchestral and chamber works during his years in California, including Concerto da Camera, Symphonic Legend, Symphonic Rhapsody, various solo piano works, such as Two Yuletide Pieces, and the Scandinavian Suite, which celebrated his Lutheran and Scandinavian heritage.

Hanson was the first recipient (along with Leo Sowerby) of the American Academy's Rome Prize, awarded by the American Academy in Rome, in 1921, for both The California Forest Play and his symphonic poem Before the Dawn. Thanks to the award, Hanson lived in Italy for three years. During his time in Italy, Hanson wrote a Quartet in One Movement, Lux aeterna, The Lament for Beowulf (orchestration Bernhard Kaun), and his Symphony No. 1, "Nordic", the premiere of which he conducted with the Augusteo Orchestra on May 30, 1923. It has been incorrectly stated that Hanson studied composition and/or orchestration with Ottorino Respighi, who studied orchestration with Nikolay Rimsky-Korsakov. Hanson's unpublished autobiography refutes the statement, attributed to Ruth Watanabe, that he had studied with Respighi.

Upon returning from Rome, Hanson's conducting career took off, making his premiere conducting the New York Symphony Orchestra in his tone poem North and West. In Rochester, New York in 1924, he conducted his Symphony No. 1, and this brought him to the attention of George Eastman, inventor of the Kodak camera and roll film, who chose Hanson to be director of the Eastman School of Music. Hanson held that position for forty years, turning the institution into one of the most prestigious music schools in America. He accomplished this by improving the curriculum, bringing in better teachers and refining the school's orchestras. Also, he balanced the school's faculty between American and European teachers, even when this meant passing up Béla Bartók. Hanson offered a position to Bartok teaching composition at Eastman, a position that Bartok declined as Bartok did not believe that one could teach composition. Bartok placed Hanson in a difficult position as he wished to teach piano at Eastman - Eastman had a full staff of piano instuctors at the time.

In 1925, Hanson established the American Composers Orchestral Concerts. Later, he founded the Eastman-Rochester Symphony Orchestra, which consisted of first chair players from the Rochester Philharmonic Orchestra and selected students from the Eastman School, and then The Festivals of American Music followed. Hanson made many recordings with the Eastman-Rochester Symphony Orchestra, not only his own works, but also those of other American composers such as John Alden Carpenter, Charles Tomlinson Griffes, John Knowles Paine, Walter Piston, William Grant Still, and other, lesser known, composers. Hanson estimated that over 2000 works by over 500 American composers were premiered during his tenure at Eastman.
More Information
Please sign in with your email address or Create an Account.
New Products
Compare Products
Compare
Clear All
You have no items to compare.
My Wish List
Last Added Items
Go to Wish List
You have no items in your wish list.
Vinyl Records Vancouver
Categories
Help
Quick Link
Newsletter