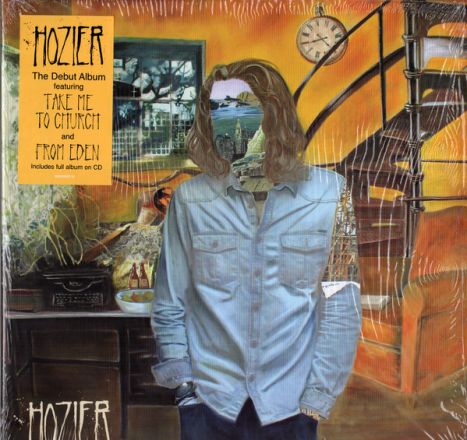 B1 Someone New
B2 To Be Alone
B3 From Eden

It's not often that you stumble across a songwriter whose lyrics both sound and read like poetry. When those lyrics are set to music that balances burning indignation with lilting tenderness, and delivered in a voice imbued with the spiritual passion and yearning of gospel and the blues, you figure you've chanced upon something special. And so it is with 23-year-old Andrew Hozier-Byrne, an Irish singer-songwriter and multi-instrumentalist from County Wicklow who goes by the name of Hozier.

Hozier releases his self-titled debut album on Columbia Records, following his two EPs Take Me To Church and From Eden. The new album produced by Ron Kirwan (PJ Harvey and Depeche Mode). Hozier will feature the hit single "Take Me To Church" as well as his most recent release "Sedated."

Raised in a musical family, Hozier's childhood and adolescent listening was dominated, he says, "by Chicago blues, Texan blues, Chess Records, Motown, and then I discovered jazz, but more importantly, Delta blues that extraordinarily haunting sound. Skip James, Blind Willie Johnson, people like that. Later, it was Pink Floyd, Nina Simone, Billie Holiday, plus Tom Waits was a huge, huge influence. I was always drawn to singers with something haunting about their voices. The same goes for writers such as James Joyce and Oscar Wilde. You can't define what it is, but it buries itself deep in your soul."

After a string of sold out dates and electrifying performances including TV appearances on The Late Show With David Letterman and The Ellen DeGeneres Show, Hozier will return stateside when he launches his first national headline tour this fall. The tour crisscrosses the country before wrapping up with two shows in New York City.

There's nothing modern or trendy about this album, it's simply a once-in-a-lifetime talented dude with a singing voice you won't believe, singing one heartbreakingly well-crafted and moving song after another. Deeply personal, poetic, resonant and sexy mix of blues, soul, gospel rock and folk. Pure alchemy.

It is nothing new for me to say that like most, I discovered Hozier through his breakout single "Take Me To Church". I have to admit that I did not think the song was special upon my first few listens. But like most great songs, it latched onto me like a parasite and I'm glad it did. The meaning and soulful nature of the song was incredible. I was convinced that this was a true artist who would make an album worth listening to when it came out. Then weeks leading up to the albums released I listened to another song to be included in it called "Sedated" and that fully solidified my interest in buying this. Well now the album is here and I've given it a good few listens.

1. Take Me To Church: The perfect opening track and lead single! I'm pretty sure this song is why you are here too. Can we all agree this is one of the biggest surprise hits of 2014? Great soulful and seductive song with amazing vocals that metaphorically compares falling in love to religion. Masterpiece. 10/10

2. Angel of Small Death & The Codeine Scene: What a title. The song starts off slow with atmospheric blues hums in the background before the drums come in and brings it all together! The bridge part of the song offers one of the best guitar moments in music in recent memory. 9.5/10

3. Jackie and Wilson: The style changes just a bit with this song. The riff is nice, but again Hozier shines great with his vocals especially in the chorus. Toward the end the distinctive atmospheric blues effect can be heard again and it works great! Very catchy and meaningful. 9/10

4. Someone New: Another impossibly catchy tune. The guitars during the verses make it feel perfect for listening to in the sunlight or at the beach! The chorus will be stuck in your head! Such a great melody! 9.5/10

5. To Be Alone: The bluesy guitars on this one along with the whistle-like howls make this one feel like something to listen to during the sunset. The vocals style changes throughout and it works well. 9/10

6. From Eden: This is a great love song that is worthy of a single. The lyrics about Eve and the Serpent are very clever without sounding too religious. In fact, most people won't even catch on with that and just hear it as a sweet cute love song which is even better! One of my favorites. 10/10

7. In A Week: At first I thought this was boring. But after a few listens, I really recognized the tragic beauty of the lyrics and somber vocals. Karen Cowleys guest vocals give it more elegance and at times haunting. The intertwining of their voices toward the end is just majestic. 9.5/10

8 Sedated: A sexy and catchy atmospheric anthem that just grooves by. Dare I say it? In my opinion this is even better than "Take Me To Church". But thats my personal opinion. The lyrics are so clever and true with a chorus worthy of making love to, even if the lyrics aren't exactly sexual. So far my favorite of the album. 10/10

9. Work Song: Such a beautiful ballad! The distant hums throughout the song just give me a warm feeling in my chest. The chorus is destined to make this an anthem. Expect many people to cover this all over the place. 10/10

10. Like Real People Do: Very romantic song. Hoziers vocals seem to glide by elegantly. Just a perfect sweet song to listen to with your lover by your side. 9.5/10

11. It Will Come Back: This is one of those songs which has verses that are better than the chorus. The guitars do take the stage more on this song too. 9/10

12. Foreigners God: This is the closer of the album for me and it closed it well. Very meaningful song with great delivery. The vocals and the instrumentals work so great together here and I can really feel the song. 10/10