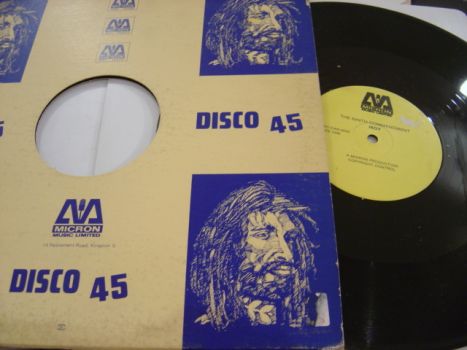 As if the last year before we enter the next millennium didn't deliver enough moments of sadness to Reggae music in general and its devoted fans in particular, the last week of November 1999 brought more sorrow as the Reggae massive was informed that I Roy has died in Kingston on Saturday 27th November. Tragic news. He had been dogged by ill health for the last few years, and all the doctors he had seen weren't able to tell him exactly what the problem was, but it seems to have had something to do with swelling around the heart. Leroy Mafia - of UK's renown Mafia & Fluxy - was in Jamaica shortly before I Roy's death and was working on setting up a fund raising UK show for him and getting him some medical treatment at the same time. Sadly, it's too late for that now. Sadder still, Mafia reported that one of I Roy's sons was killed in prison two weeks ago and after that "he just seemed to lose it". Roy didn't even have a home any more - he was living on the street at the time he died. What a tragic end for such a wonderful man and great Reggae artist.

I Roy was born Roy Samuel Reid on 28th June 1942 out in the countryside in the parish of St. Thomas, in the east end of the island of Jamaica. With three brothers and three sisters he was one of the seven children of a humble farmer. He eventually moved to Kingston in his early teens and studied at Dinthill Technical college prior to working as a government accountant, although it was his abiding love for music which provided the overwhelming stimulus throughout his life.
In addition to his civil service career in the mid-sixties, Roy Reid chatted on microphones, although he had no strong interest in deejaying at the time. However, encouraged by the enormous impact the deejays were having on the dancehall crowds, he established and operated Turbo Sonic Sound and "Soul Bunny", a weekly reggae discotheque near the Victoria Pier in Kingston, JA. Shortly thereafter, Roy began deejaying for most of the important Spanish Town-based Sound Systems, including Son's Junior, Stereo and Ruddy's Supreme.

Until February 1975 I Roy remained in the background preparing the tough fight back, musically spoken, that put no less than thirteen of his records in the hit parades within eight months ! Those records were : "Forward On", "Fire Stick", "Padlock", "Natty Down Deh", "Dread In The West", "Teapot", "I Man Time", "Time Bomb", "Rootsman", "Mad Mad Hatter", "Straight To Jazzbo Head", "Jazzbo Hafe Run" and "Welding". The latter, a controversial sexual number, was produced by Channel One's owner Joseph "Jo Jo" Hookim and achieved good sales worldwide. Actually it was one of the first records with the distinct "clap" sound on the drum that became synonymous with the studio. By this time I Roy was already one of Jamaica's most articulate deejays, who, with his well-chosen lyrics, jive rap, rhymes and shouts, knew exactly how to move his public. I Roy's huge success made that his contemporaries launched musical attacks against him and those around him. The most vivid clash was that involving Prince Jazzbo, in which I Roy fired the first salvo with a tune entitled "Straight To Jazzbo Head". That song contains such lyrics as "Jazzbo, if you were a jukebox I wouldn't put a dime into your slot" and "Russian roulette bloodclot on ya". Prince Jazzbo responded with "Straight To I Roy Head" and more tongue-in-cheeck tunes - even other singers and deejays got into the act - followed. However, it was producer Bunny "Striker" Lee who earned a great deal of money through the high sales of these records. A collection of titles was even brought out on LP "Step Forward Youth" (Live & Love label, 1975).


In 1976, I Roy's association with producer Tony Robinson led to a contract with Virgin Records, for whom he subsequently cut five albums : "General", "Musical Shark Attack" (which sold no less than 100,000 copies in the UK only), "World On Fire", "Crisis Time" and the excellent 1977 set "Heart Of A Lion". In 1977 producer Alvin 'GG' Ranglin took I Roy to the Channel One studios to record songs for an album entitled "The Best Of I Roy", released in May 1977. The ten track album beared the heavy backing sounds of the Revolutionaries, which is - to some extend - indicative of the times. By the early eighties I Roy couldn't maintain his high lyrical standards. This, in combination with the changes in style, led to a less prominent role in the Reggae scene for I Roy and allowed younger deejays to take over. Although not that prolific as in his heydays I Roy still continued to record and put out records. Between 1978 and 1994 at least sixteen I Roy albums were released on labels such as Virgin, Justice, Imperial, Micron, Third World, Joe Gibbs, Mr. Tipsy, Blue Trac, Kings Music and on Umoja, the label of his former rival Prince Jazzbo. However, they never matched the successful releases of the seventies, when there were none to compare, when I Roy was at his best. Although some Reggae fans regard I Roy as another copy cat of U Roy, it is beyond doubt that I Roy is truly a cornerstone in the History of Reggae.
More Information
Please sign in with your email address or Create an Account.
New Products
Compare Products
Compare
Clear All
You have no items to compare.
My Wish List
Last Added Items
Go to Wish List
You have no items in your wish list.
Vinyl Records Vancouver
Categories
Help
Quick Link
Newsletter