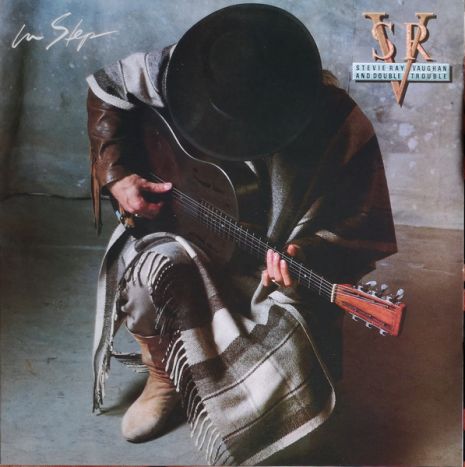 "In Step" is often cited by critics as Stevie Ray Vaughan's best studio album. And his playing on this album is actually a bit more economical, maybe even a bit more mannered, than on his earlier releases...whether or not that's a good thing is a matter of taste, I suppose.

The production is a bit more slick than usual as well, the tone of Vaughan's guitar is cleaner, and a keyboard player and occational horns have been added to the mix, but that's not to say that Stevie Ray Vaughan had gotten soft on his final solo album before his tragic death in 1990 - he just turned a little bit more towards rock rather than blues.

"In Step" opens with a blistering rocker, "The House Is Rockin'", followed by the bluesy "Crossfire", which features a superb solo by Vaughan.
"Tightrope" ventures into hard rock territory, but Stevie Ray's cover of Willie Dixon's "Let Me Love You Baby" is genuine blues-rock, and it is followed by a good reading of Buddy Guy's slow, tortured blues "Leave My Girl Alone". Vaughan didn't quite have the pipes to match the intensity of Guy's original, but he does a fine job with what he has, and the guitar playing is superb as usual.

"Travis Walk" is a funky, up-tempo instrumental with some great drumming by Chris Layton (who, incidentally, used to play drums for Buddy Guy and Lightnin' Hopkins). "Wall Of Denial" is pretty well known, but it is perhaps one of the lesser tracks on this album, with some fine guitar playing but not much in the way of either hooks or a real "groove" to grab a hold of the listener.

"Scratch n' Sniff", however, is a fine up-tempo rock song with some excellent boogie piano fills by keyboardist Reese Wynans, and a great solo by Vaughan.

"In Step" album winds down with the excellent nine-minute instrumental "Rivera Paradise", a slow, moody piece.