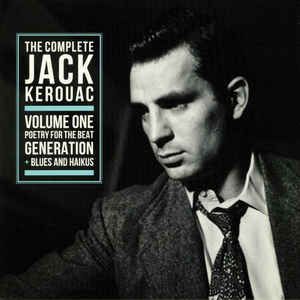 Poetry For The Beat Generation

D1 Poems From The Unpublished Book Of Blues

Poetry For The Beat Generation

" Although Jack Kerouac was the "voice of his (beat) generation," it was his writing - rather than his speaking - voice that became well-known. His three albums of spoken word poetry and prose, two from 1959 and one from 1960, received little circulation or critical notice upon their initial issue," " Poetry for the Beat Generation teams Kerouac with jazz pianist (and television personality) Steve Allen"

" The album was inspired by an impromptu pairing of Kerouac and Allen at New York's Village Vanguard, and the subsequent single-take studio session lasted only an hour. Allen's improvised backings are lyrical and nearly sentimental in their melodiousness, more background late-night tinkling than challenging bop. Kerouac's recitations roam more freely, powered by the strength of his rhythmically riffed words. His poems are percussive stories that break through any regulation of punctuation, paragraph or stanza, and his New England-accented voice is animated and rye.

Originally recorded for Dot, the album was dropped by label-head Randy Wood, reportedly due to concerns about the edginess of the content. But having your counter-culture expression suppressed in the 1950s wasn't exactly news, and the album quickly found distribution through an independent label. Yet even with Kerouac's literary fame in full flower (he'd published On the Road in 1957 and The Subterraneans and The Dharma Bums in 1958), his debut album was little known, and for many years, a rarity. " ( amazon customer)

The art-soaked, kicks-filled life of Jack Kerouac produced three records, and the second one Blues and Haikus found him in the studio with post-bop saxophone mainstays Al Cohn and Zoot Sims. While the record only sporadically attains the heights of its rather lofty ambitions, it remains a fascinating document, for it illuminates Kerouac as an artist of beautiful if problematic vision, vindicates Cohn and Sims as a pair of true pros, and brings great perspective to the mindset and milieu of the ‘50s American hipster.