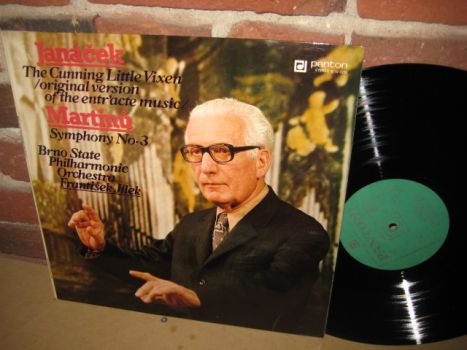 
With The Vixen Janáček returned to the theatrical experimentation of Osud and Brouček, moving away from the predictable operatic story-line of Kát'a Kabanová. In 1920 the Brno popular newspaper Lidové noviny commissioned Rudolf Tĕsnohlídek to write a novel to be serialised which was to be based around a series of drawings by Stanislav Lolek telling the tale of the adventures of Vixen Sharp-ears. According to Marie Stejskalovás reminiscences, published in 1959, it was she who introduced the Vixen to Janáček. She kept the cuttings from the newspaper, which was the inspiration for the work, and Tĕsnohlídeks novel became the basis for the libretto. Despite the fact that many have argued its experimental basis; use of children on stage, preponderance of ballet scenes, the very use of a cartoon as the inspiration for an opera. It is also greatly indebted to operatic heritage. It follows on from the post-Wagnerian Märchenoper (fary-tale-opera) tradition as made paradigmatic in Humperdincks operas Hänsel und Gretel and Königskinder. Equally its use of a travesti role (the Fox) to suggest youthful or sexually virile personalities (after Mozarts Cherubino, Verdis Oscar, Massenets Chérubin or his Prince in Cendrillon, Strausss Octavian, Humperdincks Hänsel) shows a debt to tradition, which is sometimes overlooked. In its quasi-anthropomorphic treatment of the animals (some of the roles are doubled with those of the humans too) Janáček looks back with Beatrix Potters and Kenneth Grahames cuddly creations to an Ovidian world. However Janáček moves away from pure traditionalism by pioneering a fantastic musical language for the forest, based on his notebook of animal sounds and a bitter sweet lyricism for the Vixen and the Fox (at its most heady in the Act One dream interlude and their Carmina Burana-style nuptials in Act Two). These stylistic innovations are married with a moving pantheistic close where the Forester realises, in one of Janáčeks most tender passages that nature has a cyclical basis, which goes much beyond the traditional mirrors of the Märchenoper genre, such as found in Dvořáks Rusalka. It has, unsurprisingly received a large number of performances across the world; it is perennially popular with children as an introduction to opera and is to be animated by the BBC in the near future, to be shown on Easter Sunday 2003


Martinu's war-time 3rd symphony is, in my view, one of the most astonishing pieces of music to be written in the 20th century, and holds (again in my view) a fair claim to being one of the, say, 25 greatest symphonies of all time. It certainly surpasses in consistentency and concentration anything Shostakovich ever wrote - or Tchaikovsky for that matter. Martinu's style is unmistakable: the restlessly shifting rhythms, the snatches of melancholy folk-song tunes, the dark timbre of low piano notes underneath it all. There are rhythmic complexities here that boggle the mind, and yet sound completely natural (listen to that astonishing sequence of superimposed triplets, semiquavers, and demi-semiquavers pushing forward and upward relentlessly and mysteriously in the slow movement). The first two movements are distinctly dark-hued, with a harrowing sense of foreboding. The finale then fights these dark forces with considerable energy, and almost comes out victorious.
More Information
Please sign in with your email address or Create an Account.
New Products
Compare Products
Compare
Clear All
You have no items to compare.
My Wish List
Last Added Items
Go to Wish List
You have no items in your wish list.
Vinyl Records Vancouver
Categories
Help
Quick Link
Newsletter