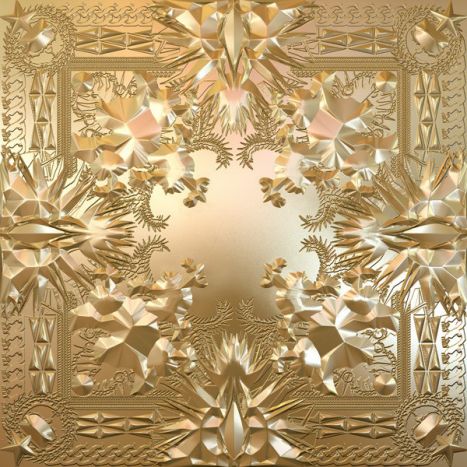 
Superstar collaborations always generate a gargantuan amount of buzz. Certainly a collaborative affair with two of hip-hop's `kings' - Kanye West & Jay-Z - is no different. Watch the Throne's anticipation could be likened to the `Super Bowl' of hip-hop - it just had to materialize. Alongside the anticipation and buzz, there is almost always a downgrade when it comes to the actual material being presented. Falling in line with that, Watch the Throne is a solid effort and for naysayers who expected an incredibly undercooked effort, it over performs. That said, there was room for improvement on Watch the Throne as well, mostly in the area of its overall cohesion. One has to look no further than the first two cuts unlikeness to one another ("No Church in the Wild" and "Lift Off") to see a lack of cohesiveness in theme or concept. Despite this `all-over-the-place' persona, the album works.


"No Church In the Wild" seems a strange entity from an initial listen, but with successive spins, the odd cut unfurls its brilliance. The beat, contributed by 88 Keys is somewhat understated and simple, but that is the appeal. The crooning by Odd Future vocalist Frank Ocean is a nice touch, not to mention some oddball auto-tuned vocals by The-Dream. Comprised a handful of samples, "No Church" proves alluring with interesting rhymes by both superstar rappers. "Lift Off," featuring Beyoncé is most certainly aimed to be the pop-crossover cut, contrasting the alternative sensibilities of "No Church in the Wild."


The production is solid (Kanye West, Jeff Bhasker & Mike Dean) and the track is enjoyable, if a little clunky. West goes back into 808s & Heartbreak territory with some quasi-rap/sung parts. Finishing off a trio of sound cuts, "N**as In Paris" shines brightly with the best production work as of yet (Hit-Boy, West & Mike Dean), providing yet another contrast. The best part of this five-star cut might be the change of pace, demarcated by a change in production scope and the hook-line "Don't let me get in my zone..."


"Otis" easily eclipsed "H*A*M" once it was released as a single promoting this effort ("H*A*M" only appears on the deluxe version). Characterized by its sample of Otis Redding's "Try A Little Tenderness" (it also uses two other samples), "Otis" is overall superb. While the verses by Jay-Z & Kanye are solid, no über fan will be so laudatory to call it the best raps of their career by any means. "Gotta Have It" is solid, though not nearly as lofty as the first couple of cuts, while the Nina Simone sampling "New Day" is spectacular. Both MC's have solid verses here, though West may have a shining moment: "And I'll never let my son have an ego/he'll be nice to everyone, wherever we go/I mean I might even make `em be Republican/So everybody know he love white people..." Charming, right?


"That's My B***h" samples James Brown classic "Get Up, Get Into It, Get Involved" and features some killer drum programming that gives off an overt, old-school hip-hop vibe. Solid and enjoyable, "That's My B***h" benefits especially from a clever hook. "Welcome to the Jungle" is typical Swizz Beatz. While it isn't a top echelon cut, Jay has a great reference: "Black Axl Rose/Move Halfs and Wholes/Come down to the Jungle/Just ask for Hov..." "Who Can Stop Me" is another shining moment, featuring some intense, fiery rhymes from Jay especially. The Hook stands out if nothing else does: "This is something like the Holocaust/Millions of our people lost/Bow our heads and pray to the lord/Til I die I'mma f***in ball/Now who gon stop me/who gon stop me huh?..."

"Murder to Excellence" is buzz-worthy for sure, creating an ambitious and interesting cut. "Made In America" featuring Frank Ocean once more is enjoyable, most notable for Ocean's hook ("Sweet King Martin/Sweet Queen Coretta/Sweet Brother Malcolm..."). "Why I Love You," featuring Mr. Hudson closes the standard edition of the effort solidly, though it is by no means the best cut. [The deluxe edition adds a couple of cuts to the arsenal. "Illest Mother- Alive" is enjoyable, while "H*A*M" is the bigger attraction. "Primetime" is a NO ID contribution, while "The Joy" features oft-sampled Curtis Mayfield's "The Makings of Me."]

Despite lacking cohesiveness, Watch the Throne is enjoyable and well worth the buzz. Most have come to expect superstar collaborations to underwhelm - R. Kelly & Jay-Z's two previous collaborative efforts certainly did. West & Jay-Z provide a pleasant surprise, even if West's previous album My Beautiful Dark Twisted Fantasy is a better effort than Watch the Throne.

1) No Church in the Wild feat. Frank Ocean - A good opener to the album. Frank Ocean is the new comer in the game and he should be proud because having a fresh face on veteran album is a pretty big accomplishment for Odd Future's R&B singer. Frank Ocean provides a nice chorus while Jay and Ye rap in retrospect. Nice production from Kanye and 88-Keys filled with Gritty drums and animal sounds in the back ground create a nice atmosphere. 10/10

2 Lift Off feat. Beyonce - This is probably the Album's next single featuring Jay-Z's wife Beyonce. This was the most anticipated song for me from the album, and I have to say I'm a little disappointed. Beyonce takes the show singing the long (but good) hook while Kanye comes in first dropping his very awkward verse. He does a little auto tune and mumbles at the end of his verse but sounds surprisingly good. Jay-Z's presence is close to non-existent sadly only doing a quick 8 bar verse that doesn't excite nor serve a real purpose. With that said this is the most impressive song production wise, with the help of "Fantasy's" production team Mike Dean and Jeff Bhasker they create a truly captivating song. I have to knock off a few points because this song sounds incomplete due to very very short appearances from the 2 main guys. 8/10

3) Ni**as In Paris - Now while I don't particularly like simple modern day beats such as these, it is pretty damn entertaining. It is not a high caliber lyrically indulged type of song, it's more of a f***ing around kind of song. It's a great party banger with a catchy hook provided by Jay and arrogant fun lyrics from Kanye, plus the Will Ferrell dialogue incorporrated within the song is very funny.


4) Otis - At first listen, this song was a little disappointing, but it grew on me the more I heard it. The choice of sample was a little of bad taste, Otis Reddings "Try a Little Tenderness" is a good song but the style of sampling was a bit weird I must admit. The lyrics are full blown braggadocios raps from the both of them but the cleverness is clearly shown. This is known as an anti-single, no chorus, no catchy hooks just straight rapping like in the old days. Not my cup of tea but hey, this is "luxury rap".


5) Gotta Have It - Sick production by The Neptunes sampling the Godfather of soul James Brown. This is just a fun track not to be taken too seriously. This is Tag-Team rapping at its finest, with Mr. West and Mr. Carter going back and forth finishing each other's verses. This song showcases the nice chemistry they have together. I just wish it was a bit longer.

6) New Day - This is the hidden gem as well as the Heart of the entire album and probably the most touching song made this year in Hip Hop. Kanye and Jay rap by venting to their unborn songs. With great in-depth lyrics from Kanye "I might even make him republican, to let everyone know he loves white people" and from Jay "Promise to never leave even if his mama tweakin, cuz my Dad left me and I promise to never repeat him." Accompanied by the great RZA, the production is very haunting with a very soulful sample from Nina Simone used as the songs Hook. 10/10

7) That's My Bitch - This song was the VERY first song released from WTT ever since the album was conceived. This version differs mostly in the length because the leaked version was 1 minute longer. I love the production on this song, and the added vocals of La Roux's Elly Jackson and Bon Iver's Justin Vernon are a nice touch.


8) Welcome to The Jungle - I have always HATED Swizz Beatz productions and this song is no different. Swizz's productions are amateur at best, way too simple and nothing but percussions. The lyrics are decent from The Throne, but this is my least favorite track on WTT. The song is good but it's not something Jay-Z and Kanye haven't done before. I'm sorry but Swizz Beatz adlibs always kill a song for me.


9) Who Gon Stop Me - When I first heard Jay and Kanye were gonna do a Dub-Step song my first thoughts were "Why?" and "It's going to be a disaster." I was only half right thankfully. This song's sole purpose is to show the versatility of Mr. West and HOV. At first listen, I was concerned if they were able to flow on a dub-step track, and the result was not too bad. Kanye's voice compliments the bass slapping production, but as for Jay the beat just became hectic for him to keep up and in the end it just made Jay sound sloppy and choppy. But I commend them for trying something different and for Jay providing a classic 32 bar verse.


10) Murder to Excellence - While New Day served as the "Heart" of the album. THIS song is the "Soul". Kanye and Jay rap basically about rags to riches or Life and Death. The first half of the song is about death in the black community (although Kanye does do an unnecessary comparison of violence between Chicago and the war in Iraq?) and the second half is about status and how black people should aspire for more than the usual. The song is dissected into two main parts "Murder" and "Excellence" (hence the title) and each part is accompanied by two completely different beats, Murder by Swizz Beatz (which actually isn't bad) and Excellence by S1. Great production and great lyrics. 10/10


12) Why I Love You So feat. Mr Hudson - A fitting end to Watch the Throne. This song is in retrospect Jay-Z's thoughts of where he is now and reflecting why things are the way they are whether it be his past friendships or his loneliness at the top. But of course Kanye is with him so it's not soooo bad. The presence of G.O.O.D. music artist Mr Hudson seemed a bit too short; in my opinion Kanye should have used him a bit more in this song due to the fact that he only has one line which he screams out tirelessly throughout the entire song. It makes me wonder why he is credited as a full feature in the first place. If the song were a bit longer and Mr Hudson was used a bit more, this song would've been perfect.