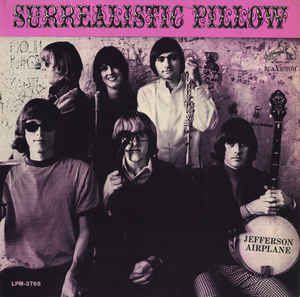 The group's hippie ethos was and remains omnipresent, the very core of its sociomusical importance. Thus it is that the Airplane's most celebrated and probably greatest album, SURREALISTIC PILLOW, sounds like many other classic records from 1967 - no less so than SGT PEPPER.

the flower children had a lot more to offer than free love and cheap acid.
Right from the heavily reverbed drums opening "She Has Funny Cars," PILLOW is a powerfully expansive and entertaining experience, and its overt sense of its own time and place does nothing to weaken it. The hard-rocking "Somebody to Love" is still a rousing blend of psychedelic swagger and pop accessibility,

"D.C.B.A. 25" a lovely folk-rock gem which can wring a nostalgia for the Summer of Love even from one who wasn't there. It's a pair of beautiful ballads, however - "Today" and the magnificent "Comin' Back to Me" - which are really the album's highlights.

Singer Marty Balin's lovely, emotive tenor has never quite gotten the credit it deserves; but his performances on these two songs make clear that it was he, rather than the overhyped Grace Slick, who truly was the voice of Jefferson Airplane.

Not that Slick doesn't do some fair work of her own, on flute and keyboards as well as at the mike: "White Rabbit" may sound corny from the smarmy vantage of 2006, but put it up against any of the tripe currently being peddled as worthwhile music on FM radio and it's nothing less than high art.

still feel good music stirs the soul the 60's have never really died simply because time does not exist and the eternal now lets everything exist eternally. Mind can step aside and allow the infinite progression of magnitude that is existence to open like a blossom to any so called time or event horizon and presence will saturate the energies from anywhere in the quantum flux back to any soul that wants to be reenergized with the sounds of that time. Music transcends time.

Jefferson Airplane - She Has Funny Cars

Probably one of the most underappreciated songs the JA did.
But a classic nonetheless.

Grace Slick does such creative things with her voice. Sometimes I wonder if she is an alien from an artistic supergenius alternate universe. Her and Marty Balin's voices fit together extremely well. On top of that, the rest of the band is phenomenal too.

Jefferson Airplane - Sombody to love
with a clip made with extracts of fear and loathing in Las Vegas.

We are young, we are in love, we took some drugs and we had some of the most beautifull and tripping moments together...

This is a surrealistic song of the highest quality

One of the underrated groups of the 1960's. People tend to only remember White Rabbit and Somebody to Love, but they were so much more. And while the Beatles were singing all you need is love and Obla Di Obla Da, the Airplane was singing for the overthrow of the American government. While I don't share their politics, that was a brave stand to take in those days.